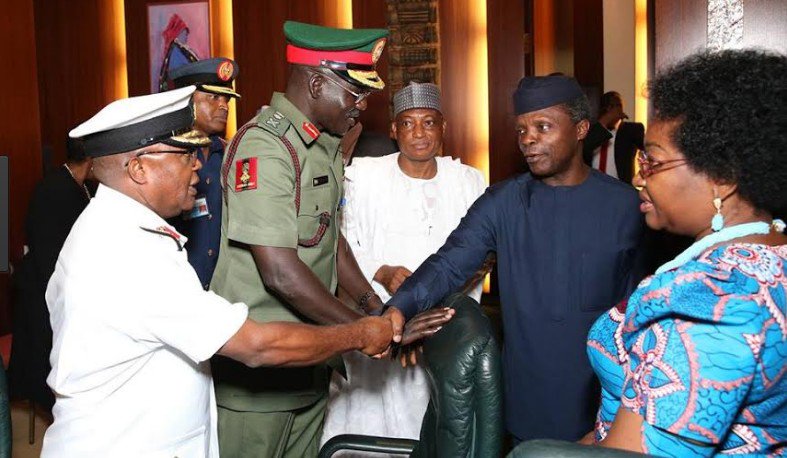 It is becoming beyond ‘be careful.’ The lies and conspiracies of the Nigerian military are becoming more and more treacherous to treasonable quality.

President Muhammadu Buhari has been fed with the lies and has repeatedly announced the defeat of Boko Haram to international audiences only to be embarrassed by video releases and deadly actions of the rag tag group.

The latest unwarranted lies of the army are beyond belief. According to news reports, the army claimed it had rescued university staff kidnapped, only for the university to announce that the army must mean, “recovered dead!”

In the report, the army claimed 10 bodies were recovered and these were the bodies of an officer, 8 soldiers and 1 civilian. However the University named 4 of its members recovered dead while announcing that 4 others were missing. Boko Haram later showed 3 of the missing 4.

Why do they lie everyday?

If we cannot trust them with things as simple as information on attacks and rescues, can we trust anything about their operations against Boko Haram?

Are we not inclined to believe the local narrative that the army gave Boko Haram a 2-week space to evacuate Sambisa forest before they resumed the assault on the hideout?

Is a lying army not likely to be as described, delaying defeating the terrorists to make billions from the profits of war budgeting and to continue coveting all business trade routes in Borno to fill their pockets?

We call on the Buhari-Osinbajo government to call the army to order. I repeat an earlier recommendation in a constructive write-up I released this June, captioned “Peregrino Brimah: Boko Haram Is Still Very Much Here And Ever So Deadly,” for the army to embrace truth and stop concealing the names and numbers of Nigerians killed. This is a crime against humanity.

As we have severally suggested, the army should call out for help and recruit natives, hunters and others of us eager to volunteer to help end this war once and for all. Many of us are afraid the desperate and dishonest army top command is making secret pacts with the terrorists which it expects them to abide by.

Buhari ordered the relocation of the military command to the northeast, but rather than stay there and end the war, the military chiefs have been galavanting around Nigeria, being involved in policing various states in deadly ways where the military is not authorised to operate as required by an act of congress. This harmful lawless belligerence and dereliction of duty has to end. We thank Acting president Yemi Osinbajo for sending the military chiefs back to their posts.

The army today stands accused of granting an illegal amnesty to Boko Haram, dubbed “safe corridor,” which it has no constitutional authority to. This if endorsed by president Buhari is of course an impeachable act as I have earlier highlighted to the national assembly. As the Nigerian constitution stipulates and as was done by late Umaru Yar’Adua of distinguished character and memory, any amnesty can only be granted with full consultation with the “council of state.” An amnesty for killers and rapists is not a small matter. The lies and errors of the army may have a lot to do with the current sad state of security in Nigeria over a war that should have long been won.

If this administration cares about the people, it is time to retire the army chiefs implicated in a variety of gross violations against the nation’s conscience and humanity. It is time for honest soldiers to be in charge, not snake-ish politicians in mufti. It is time to put the Nigerian people first, above the cabal, military and civilian.  The #CabalMustGo!