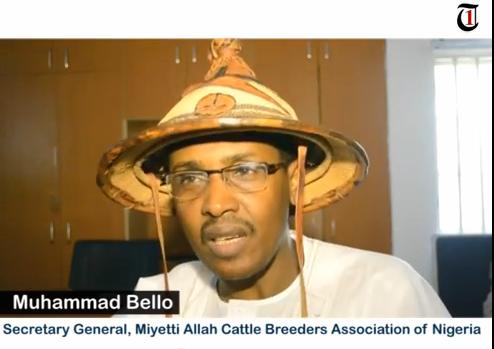 MINISTER of Interior, Lt General Abdulrahman Danbazzau, has promised that the Federal and Benue State governments will put heads together and collaborate to find lasting solution to the recurrent killings in Benue communities by suspected herdsmen.

The Minister, who spoke yesterday in Makurdi , when he led a delegation to commensurate with the government and people of the state on Monday’s killing of over 50 persons in the state by suspected herdsmen, blamed the killings on criminal elements and promised that the masterminds of the carnage would be apprehended.

Meanwhile, Governor Samuel Ortom, who lamented the magnitude of killings in the crisis renewed his call for the arrest of the leadership of the Miyetti Allah Kautal Hore for earlier threatening to resist the recently enacted grazing law and also invade the state, appealed to the Federal government to support the implementation of the law “because it is intended to foster peaceful coexistence between the local farmers and herders.”

Similarly, the federal lawmakers representing the state at the National Assembly, called for the immediate arrest of the leadership of the Miyetti Allah Kautal Hore, for their alleged complicity in the New Year’s Day massacre in the state.

In a statement yesterday, in Makurdi, the lawmakers who were led by Senator George Akume, said their call was premised on the ground that the group had earlier threatened to invade the state if the grazing law being implemented in the state was not reversed.

Also, a human rights activist and Country Director of Citizens United for the Rehabilitation of Errants, CURE-Nigeria, Mr. Sylvester Uhaa, has said that the failure of the Federal Government to ensure the arrest and prosecution of the masterminds of the recurrent Benue killings is encouraging the unending bloodbath in the state.

Uhaa who spoke in Makurdi, lamented that the inability of the Federal Government to protect the lives and properties of Nigerians was the biggest failures of the present government.

He condemned the rampant wave of killings across the country, describing it as very sad, very unfortunate, very callous and wicked

Continuing, General Danbazzau said he was direct by President Muhammadu Bihari to visit the state to commensurate with the people and also assess the situation with a view to taking prompt action to find lasting solution to the crisis.

He said, “The President is concerned about the issue and is determined to ensure a lasting solution to the problem. The Federal Government understands the pains and feelings of the people of Benue State and there is no way the government will sit and watch this to continue.

“This issue dates back to 2012 and those behind it are criminals. They have been doing it in parts of the country and the Federal Government is determined to ensure that they are apprehended and made to face justice. Be assured that the Federal and Benue State governments will come together and collaborate to deal with the problem.

“We all know that the Tivs and Fulanis have always lived together for several years, so we must come together to deal with the criminals behind the killings. The crisis obviously has nothing to do with ethnicity or religion but criminality, so whoever is involved must be made to face the music.

“We must also desist from politicising the issue or allow anyone to use it for political gains rather we must all come together to find lasting solution to the crisis.”