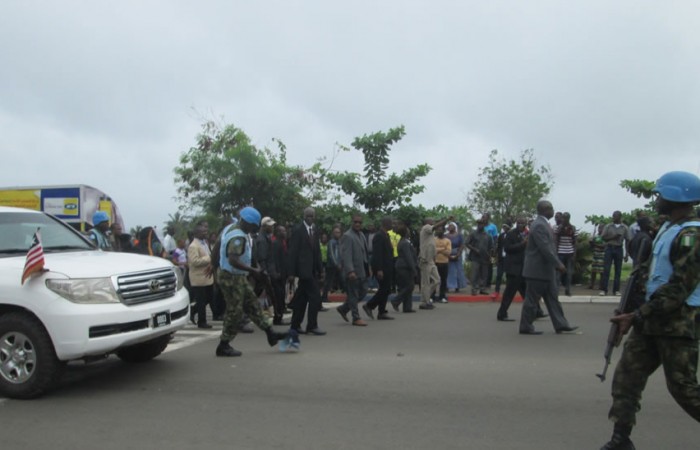 Certain factions of poorly guided Nigerians have believed that it is a crime punishable with death for protesters to block the path of the Chief of Army. This stance has been in defense of Nigeria’s army chief Tukur Buratai who killed over 1000 citizens in revenge for some students protesters blocking his road.

It is recalled that Nigerian OAU students barricaded President Jonathan’s convoy and pelted him in 2014 but did not get killed for it. The below rescued story from the very same last year, proves that the Commander in chief of the armed forces, the President of brother African nations are blocked by protesters and the result is not a massacre:

“They said what we’ve been doing is a study class and schools should close. My parents paid 36, 000 for the first semester, so is that study class money, it will not work” – Preston Shannon, Student

Monrovia, 3rd July 2015 – President Ellen Johnson Sirleaf Thursday got one of the shocks of her presidency with students physically blocking the Presidential convoy, lying on the floor in front of the motorcade. The students angry over the announced decision by the Ministry of Education to temporarily shut down all schools to reopen in September to make way for Liberia to return to its normal academic calendar which was interrupted by the outbreak of the deadly Ebola virus took their anger to the door step of the President.

After blocking the president from leaving the Monrovia City hall where she had gone for an official program, the students blocked the main road in front of the Ministry of Foreign Affairs, office of the President preventing visitors from going in and out and averting free flow of traffic. “We will not let like this Ellen Woman go anywhere. We do not want negotiation, we want to go school”, Karnia S. Dahn, a young 12th grader of the Seventh Day Adventist School located on the Paynesville outskirt of Monrovia, one of the protesting students told FrontPageAfrica.

The protesting students’ dominantly wearing neckties and clothing normally worn by 12th graders expressed that they are not happy with the decision by the Ministry of Education to close down all schools and also withdraw Liberia from sitting this edition of the West African examination Council (WAEC) annual exams. Education George Werner announced that students from 9th and 12th grades will not be entitled to promotion while the rest of the students from the remaining classes can be promoted based on their performance during the 1st, 2nd and 3rd marking period test.

Majority of the protesting students who spoke to FPA are amongst others raising three points-including the tuition and fees paid by their parents during the opening of school, the pronouncement that 9th and 12th graders will not be promoted and brining to an end their learning process. “They said what we have been doing is a study class and schools should close. My parents paid 36, 000 for the first semester, so is that study class money, it will not work”, Preston Shannon, a student declared.

According to student Shannon, they should be allowed to continue their schooling. Mercy Ballah, another protesting student said she feels cheated that her younger sibling who is 11th grade will have the opportunity to get promoted to catch up with her. “What they want my small sister to catch up with me, because she will be promoted to the 12th grade and why I have always been ahead of her, that is cheating, we can’t happen, over my dead body”, student Ballah expressed.

Darius Gweh another student said he does not care about WAEC exams but schools should be allowed to go ahead because the reopening of school after Ebola led to financial constraints on his parents. “We just came from Ebola and they said schools to open, my parents did not even have money, they had to borrow to pay my school than after three months you say schools should close? Let them give our money back”, said student Gweh.

As the protesting students continue to force their way into the Ministry of Foreign Affairs forcing police officers to form a long queue in front of the students, the protest took a political dimension with chants expressing political sentiments. “Ellen is wicked, she lied to us, Mamiewita Ellen, make it and go”, the protesters chanted. University students later joined the protest preaching hard core politics to the high school students who gathered and listened attentively.

“We are here to tell the Liberian people that Ellen is master of evil, very corrupt and incompetent. She and cronies are looting this country”, said one University student who said she joined the protest to advocate on behalf of high school students.

Meanwhile, the Liberian government has described as regrettable the action of some faculties of schools to put students on the streets in the name of protest. Deputy Information Minister Isaac Jackson said government decision to close schools and reopen September is in the interest of every Liberian.

“The government is trying to bring a reform in the school system, so it is regrettable that some schools  will put the students in the rain in the name of protest, but we will meet with those schools authorities to better explain to them government intention to transform the educational sector,” he noted.

He told the FPA via mobile Thursday that the rate of failure by Liberian students in the West African Examination Council (WAEC) exams has increased to 52% in three years, saying the situation is embarrassing. “The failure of our students is generally embarrassing; this is why government took the decision to have ample time to train teachers before the opening of schools,”

He said millions of books will be distributed in all schools before the opening of schools by government. The Deputy Information Minister noted that it has been noticed that many teachers are escaping the difficulty topics in the curriculum; something he says is contributing toward the mass failure of students.