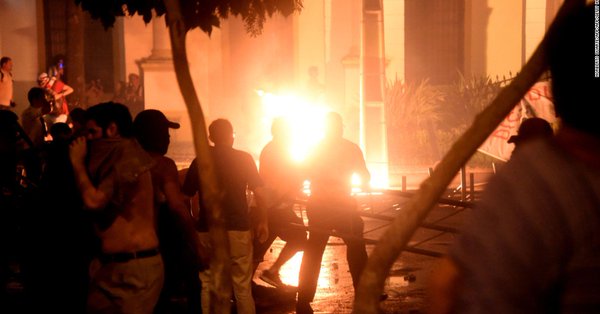 Demonstrators in Paraguay have set fire to the country’s Congress amid violent protests against a bill that would let the president seek re-election.

The country’s 1992 constitution, introduced after 35 years of dictatorship, strictly limits the president to a single five-year term.

But sitting President Horactio Cartes is attempting to remove the restriction and run for re-election.

Protesters were photographed setting fire to barricades in the streets of Asuncion, near the congress building, on Friday night. Read full in BBC

The riots and destruction continues in #Paraguay as protesters enter the parliament. pic.twitter.com/yyTlSyFYcg

#Paraguay: Protesters set fire to Congress after secret vote on bill that would allow President to run 4 re-election pic.twitter.com/lReBQ50dHE