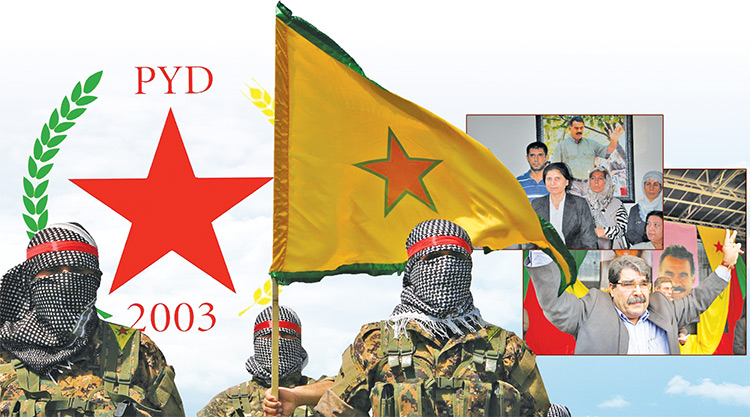 Last week we discussed Turkey’s civil war against the PKK and saw how the issue is directly related to the PYD in Syria. The PYD (and its armed wing, the YPG) was founded by members of the PKK in 2003.

Like the PKK, its headquarters are in Qandil. Its leader is the PKK leader Abdullah Ocalan. Its ideology in terms of terrorist activity and objectives is the same as that of the PKK.

The Geneva talks began last week. Turkey objected to the presence of PYD, saying, “We will not attend if the PYD participated.” It is questionably a seriously irrational act to include a terror organization to discuss the future of Syria. These words from Ankara are to a large extent a reflection of the facts: “If they are to take part in the negotiations, they should do so on the side of the regime.” It is no secret that the PYD has for long been acting in support of the Syrian regime.

Turkey’s objection was accepted, and the PYD was not admitted to the Geneva talks. Although the Geneva discussions were postponed, the absence of the PYD was regarded as one step toward the talks bearing fruit. At the same time, however, developments in the Kurdish region of Syria revealed that the American and European secret state apparatuses were acting very differently in practice.

As the Geneva talks were beginning without the PYD, British and French diplomats and President Obama’s special representative in the coalition established to fight Daesh, Brett McGurk, carried out a surprise visit to Kobani. At that same time, Deputy US Secretary of State Tony Blinken met with PYD co-chairman Salih Muslim in Geneva.

While McGurk may claim that the visit had been planned beforehand and that the timing was a mere coincidence, it is not hard to see that this visit, at such a sensitive time, was intended to send certain messages to Turkey. Following the visit, a Kurdish source said, “A senior military delegation from the international coalition met with senior members of the PYD.” Clearly, the alliance between US and European officials and the terrorists was going ahead despite Turkey’s objections.

This was the first time that the US had dispatched government officials to Syria. While Turkey was being told, “You are a member of the NATO and our ally” in front of the cameras, behind them, initiatives aimed against Turkey were under way. Doing what diplomacy requires with a smile on one’s face while forging alliance with enemies if so needed is a prominent characteristic of secret state apparatuses, is it not?

The way that McGurk posed for the cameras with Polat Can, one of the most senior figures in Qandil, and even accepted an award from him, is a detail requiring close examination. Polat Can is a terrorist who until recently was in Qandil fighting for the PKK in a PKK uniform. The way that he wore a PYD uniform while smiling with McGurk for the cameras shows the scale of the tactic being employed. At the same time, the serial numbers of PKK weapons captured by Turkey revealed that these had been given to the PYD by the US. The weapons in question are now being used against Turkish troops and police officers in Cizre, Silopi and Nusaybin. Although Ankara has shared a list of the serial numbers of the weapons with the countries concerned, the US appears to have been little affected.

Let us also remind ourselves that information that the US has built an air base in Syria in order to provide military assistance to the PYD has recently been confirmed. Thanks to this airport, the US can now send weaponry directly to the PYD. Another interesting thing is the way that the PYD, which acts entirely in concert with the Syrian regime, is backed by the US, which opposes that regime. Syrian regime forces recently agreed to act together with the PYD in an operation against the opposition held air base at Minig.

The way that the US and various European secret state apparatuses use Daesh as an excuse to pursue a policy of “any terrorist opposing a terrorist is a legal terrorist” is in fact part of a major stratagem. It is no secret that it has become impossible to defeat Daesh on the ground, for which reason the US and Europe are reluctant to engage in a land operation in the region. The US and European countries are well aware that they will be unable to defeat Daesh if they send troops to Syria. In the same way, these countries are also aware that the PYD will be unable to register any significant success in the ground offensive against Daesh.

US claims that the PYD has provided it with important intelligence in the region are also less than credible. US intelligence assets certainly consist of more than the means of few militants with no infrastructure in the area. What we are looking at is a desire to provide secret backing for the PKK, a Stalinist terror organization engaged in separatist activities in Turkey. Let us recall that the coalition forces never attacked Daesh until it attacked the PYD. The secret apparatuses in question are not in the least interested in what happens in Iraq and Syria. Their only desire is that no harm should befall the PKK, which is striving to break Turkey apart. Secret state apparatuses are known to have wanted to break Turkey up for more than a century and they have no qualms about discussing this with the assistance of fraudulent maps. Since it is impossible for them to directly support the PKK, which appears on their own lists of terror organizations and is in a state of war with Turkey, a NATO ally, they are now doing this indirectly by means of the PYD in Syria. Weaponry provided by these secret state apparatuses is now being used against Turkish troops and police officers. The raison d’être of the NATO alliance has collapsed in the face of this scenario. Our responsibility is to describe this tragedy and expose the hypocrisy.

The Danger of a Communist Kurdistan: http://www.harunyahya.com/en/Books/162394/The-Danger-of-a-Communist-Kurdistan