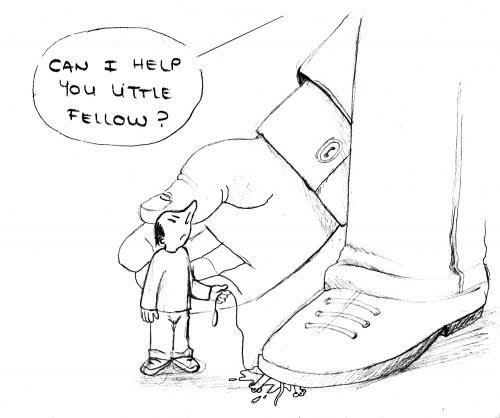 A Qatari refusal to bow to the dictate of its larger neighbours is a case study of the place of small states in international relations that is unfolding as a Saudi-UAE-led alliance prepares to tighten the noose around the Gulf state’s neck with likely new sanctions intended to strangle it financially.

No doubt, small states are watching closely as the crisis in the Gulf enters a new phase with the foreign ministers of Saudi Arabia, the United Arab Emirates, Bahrain and Egypt gathering in Cairo to formulate a response to Qatar’s refusal to accept a set of 13 demands that would undermine its sovereignty and humiliate its emir.

A Saudi-UAE deadline for a Qatari response elapsed on Monday. Saudi Arabia has repeatedly said that the demands are non-negotiable. The Saudi-UAE-led alliance demanded that Qatar halt support for militants and Islamists, close a Turkish military base in the Gulf state, lower its relations with Iran, and shutter Qatar-sponsored media, including the controversial Al Jazeera television network.

Qatar’s presumed rejection, delivered to mediator Kuwait, has not been made public but is likely to have been couched in a willingness to negotiate with its detractors based on a refusal to compromise its sovereignty and right to chart an independent course.

The response is certain to take the Gulf crisis to the next level with new sanctions intended to cripple the Qatari economy. A month into the crisis, Qatar has demonstrated that it can sustain the cutting of diplomatic relations and an economic boycott imposed by Saudi Arabia and the UAE and a score of financially and economically dependent Arab, African and Asian nations, many of them small states.

While the jury is out as the Gulf crisis unfolds, one lesson is already clear for small states: Qatar, unlike most small states, has so far on the back of its oil and gas export revenues, had the financial muscle to counter the boycott.

“The lesson learnt is that, at the end of the day, a small country must develop the capacity to defend itself. It cannot depend on others to do so,” said prominent Singaporean diplomat Tommy Koh, who is chairman of the board of governors of the Centre for International Law at National University of Singapore. Heeding Mr. Koh’s analysis, has already started to move towards self-sufficiency in dairy products, a mainstay of past imports from Saudi Arabia.

In circumventing the boycott, Qatar is aided by the fact that inter-Gulf trade accounts for less than ten percent of all the six-nation Gulf Cooperation Council’s (GGC) trade. The GCC groups the region’s monarchies, Saudi Arabia, the UAE, Qatar, Kuwait, Oman, and Bahrain.

“Trade except for food and construction materials is low. The (Qatari) government can intervene as importer and price regulator,” said Khalid al-Khater, the Qatari Central Banks’s director of research and monetary policy.

So far, the Saudi-UAE-led boycott has hit Qatar in three areas. The closure of Qatar’s only land border with Saudi Arabia has forced it to secure food and water supplies from alternative sources in Turkey, Iran, India and Oman. The same is true for construction materials.

Qatar Airways has had to absorb higher fuel costs and longer flight times as a result of the closure of Saudi, UAE and Bahrain airspace to flights in an out of Doha. Finally, Oman and India serve as alternative ports for Qatar in- and out-bound vessels because of the closure of the three states’ harbours to Qatari shipping.

Qatar has so far been able to easily shoulder the cost of circumventing the boycott. The next round of what is likely to be primarily financial sanctions is certain to be costlier but analysts and financial institutions believe that Qatar will be able to sustain the blow.

Speaking to CNN, UAE minister of state for foreign affairs Anwar Gargash said the next round would not involve a “big bang” but rather a gradual “turning of financial screws.”

The Saudi-UAE-led alliance could announce as early as Wednesday at the gathering of foreign ministers a withdrawal of their deposits from Qatar’s central and commercial banks, the revocation of licenses of Qatari banks in their respective countries, and a divestment of Qatari investments in airlines, telecommunications, retail and real estate.

International ratings agency Standard& Poor (S&P) reported that Qatari banks were strong enough to survive a withdrawal of all Gulf deposits as well as a quarter of the remaining foreign funds the banks keep.

Deposits and other funding sources from Saudi Arabia, the UAE and Bahrain, represent about eight percent of total liabilities of Qatari lenders or $20 billion, S&P said. It said that in a worst-case scenario, only two of Qatar’s 18 lenders would have to dip into their investment securities portfolio.

Based on scenarios it ran, S&P said that “the results show the rated Qatari banks to be in a decent position, on a stand-alone basis, to face a significant reduction of external funding. Even assuming a 20% haircut on the value of those investment portfolios, the banks should be able to continue operating without requiring the intervention of the Central Bank of Qatar.”

Much like with its response to the Saudi-UAE demands, Qatar has refrained from responding in kind. Similarly, the UAE has been careful to exempt from the boycott Qatari energy supplies, which would hit hard Dubai that relies on Qatari natural gas for 40 percent of its need. The question is whether it will continue to do so as the noose tightens.

As the Gulf crisis escalates, mediators are likely to find the crafting of formulas that allow both sides of the divide to save face challenging. Ultimately, the key is likely to be reciprocity, a principle that Saudi Arabia and the UAE will probably find the most difficult to swallow.

Mr. Gargash predicted that a resolution of the crisis could involve putting monitors from the US Treasury and European financial authorities in the Qatari finance ministry and central bank to ensure that no funds flow from the Gulf state to terrorist groups.

Getting both parties to agree on this is likely to be complicated by a lack of agreement on who is a terrorist and a probable Qatari insistence that the United States and Europe also monitor financial flows in Saudi Arabia and UAE.

Qatar is certain to note that Saudi Arabia has also been accused of funding militants, most recently in Britain. Prime Minister Teresa May is under fire for refusing to publish a report on foreign funding of extremism in the UK that allegedly implicates the kingdom.

A formula floated to address the Saudi-UAE demand that Al Jazeera be shuttered is likely to be equally difficult. The proposed compromise would involve holding Al Jazeera Arabic to the same standards on which Al Jazeera English, widely viewed as a highly professional journalistic product, operates. The formula would uphold the principle of freedom of the media and expression, but fall short of the Saudi-UAE aim of censoring all critical voices.

How the battle in the Gulf unfolds and how the crisis is resolved is likely to have far-reaching consequences for international relations and likely shape the attitudes of small states across the globe. To be sure, Qatar has unique advantages: financial muscle and a network of relationships built in part on its gas exports.

The question is, said Singapore ambassador-at-large and Executive Deputy Chairman of the S. Rajaratnam School of International Studies Ong Keng Yong: “What happens when small states’ core interests are impinged upon, and caught within broader big-power dynamics.  Or do small states’ interests not matter, and should be subordinated to that of big states?

Putting it another way, must Singapore be so governed by fears of offending bigger states that we allow them to do what they want or shape our actions to placate them even if they affect our national interests?… There is no choice but to stand up. Doing otherwise will encourage more pressure from those bigger than ourselves,” Mr. Ong Keng Yong said.