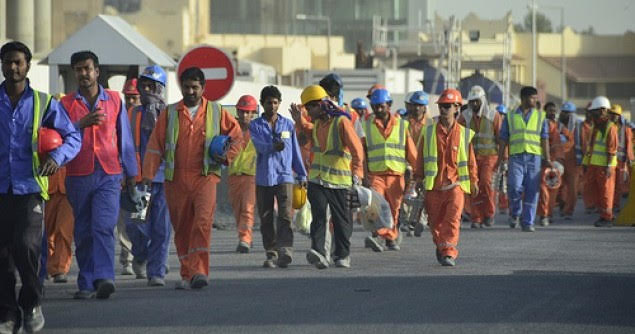 A recent survey of construction companies involved in World Cup-related infrastructure projects in Qatar raises questions about whether the Gulf state and world soccer body FIFA are doing all that could do to enforce international standards for the living and working conditions of migrant workers as well as adherence to human rights.

The issue of Qatar and FIFA’s sincerity is underscored by the fact that a majority of 100 companies operating in Qatar as well as the United Arab Emirates, which prides itself on enacting the region’s most advanced labour-related legislation and regulation, felt no need in a recent survey to be transparent about their commitment to labour and human rights. The apparent lack of pressure on companies suggests that Qatar and FIFA have so far passed on opportunities to enforce adherence to standards.

Both Qatar and FIFA have been under pressure from human rights groups and trade unions to reform the Gulf state’s onerous kafala or labour sponsorship system that deprives workers of basic rights and puts them at the mercy of their employers. The pressure on Qatar coupled with economic difficulties as the result of tumbling energy prices have prompted virtually all Gulf states to tinker with their labour regimes.

To be sure, Qatar has responded to the pressure by becoming the only Gulf state to engage with its critics. It has also promised to legislate initial reforms that fall short of activists’ demands by the end of the year. Several major Qatari institutions, including the 2022 World Cup organizing committee and Qatar Foundation, have adopted standards and model contracts that significantly improve workers’ living and working conditions.

Those standards have yet in their totality to be enshrined in national legislation. Even that however would not resolve all issues, first and foremost among them the requirement of an exit visa to leave the country.

An Amnesty International report published earlier this year charged that migrant workers involved in World Cup-related infrastructure were still subjected to “appalling” human rights abuses six years after the hosting of the tournament was awarded to Qatar and at the halfway mark since the hosting rights were awarded to the Gulf state. The 2022 Qatari committee has said issues in the report have since been addressed.

Qatar moreover recently announced that a major international union, Building and Wood Workers International (BWI), would be included in inspections of World Cup construction sites in the Gulf state. Italian company Salini Impregilo, one the companies surveyed, earlier signed an agreement with BWI and Italian construction unions to promote and respect human rights and has allowed BWI to visit its worker accommodations in Qatar.

The onus on FIFA to ensure adherence to workers and human rights meanwhile is about to increase with the soccer body’s decision to take over responsibility for preparations of World Cups starting with the Qatar tournament.

FIFA earlier this year endorsed a report it had commissioned from Harvard international affairs and human rights professor John Ruggie, a former United Nations Secretary-General special representative for business and human rights. Mr. Ruggie provided advice on how FIFA should embed the UN’s Guiding Principles on Business and Human Rights into everything it does.

Less than a quarter of the companies approached for the survey by the Business & Human Rights Resource Centre deemed it appropriate to respond despite FIFA and Qatar’s public commitments to workers and human rights. Less than 40 percent of the companies approached publicly expressed a commitment to human rights and only 17 percent refer to international standards. Only three publicly acknowledge rights of migrant workers.

The survey noted that three UAE companies – Arabtec, BK Gulf (a subsidiary of UK-headquartered Balfour Beatty), Habtoor Leighton Group, and Al Jaber Group – that had failed to respond to the survey were recipients of the Emirates’ 2016 Taqdeer Award for excellence in labour relations.

Similarly, none of the companies with headquarters in Asia — China, India, Japan, Malaysia and South Korea – responded.

“The lack of response represents a missed opportunity to demonstrate the actions they are taking to adhere to the Workers’ Welfare Standards of Qatar’s Supreme Committee for Delivery & Legacy,” the 2022 Qatari committee, the survey noted.

The survey said the willingness of companies to publicly detail their commitment to workers and human rights was important because “transparency on human rights issues has been an important driver of progress in other sectors. It generates examples of best practice that can be shared publicly with others and replicated, and enables accountability such that civil society, investors and others can hold companies to their stated actions, or call them out for inaction.”

Beyond health, safety, worker accommodation and timely payment of wages, the survey identified fair recruitment based on the principle of the employer pays, freedom of movement, worker input, and supply chain accountability as key issues that companies needed to address. The survey noted that the most progressive companies had found ways to circumvent Gulf restrictions on freedom of association and collective organisation.

Best practices included personal storage compartments in workers’ living quarters provided by Vinci (QDVC) and Laing O’Rourke to ensure that workers have sole custody of their passports in a country in which employers often illegally confiscate travel documents.

Vinci (QDVC) alongside Laing O’ Rourke, Multiplex, Salini Impregilo, SNC-Lavalin ensure that recruitment companies that illegally charge workers exorbitant fees reimbursed those recruited. Workers often arrive in Qatar and other Gulf states heavily indebted as a result of recruitment fees even though they are banned by law in Qatar and the UAE.

Carillion, Laing O’Rourke and Salini Impregilo said they supported the principle of freedom of association by providing workers in the Gulf with alternative means of expression and collective organising through worker welfare committees.

“Committed and concerted action by the construction industry holds the potential to prevent exploitation and drive genuine improvements in the lives of millions of workers around the world. While our outreach has identified some promising leading examples, the entire sector has a long way to travel to fulfil its human rights commitments,” the survey concluded.

Dr. James M. Dorsey is a senior fellow at the S. Rajaratnam School of International Studies, co-director of the University of Würzburg’s Institute for Fan Culture, and the author of The Turbulent World of Middle East Soccer blog, a recently published book with the same title, and also just published Comparative Political Transitions between Southeast Asia and the Middle East and North Africa, co-authored withDr. Teresita Cruz-Del Rosario.