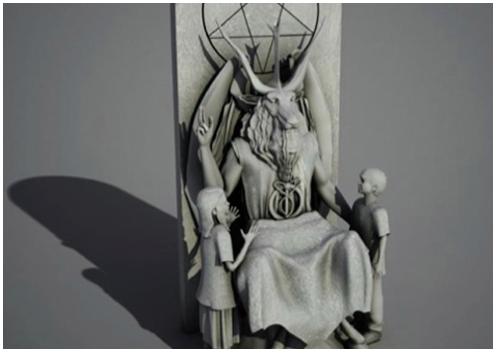 The Bible has references of fallen angels/demons intermarrying with and infecting man…this is purportedly one of the reasons women are told to cover their hair:

“The Nephilim (Giants) were on the earth in those days, and also afterward, when the sons of God came in to the daughters of man and they bore children to them. These were the mighty men who were of old, the men of renown. The Lord saw that the wickedness of man was great in the earth, and that every intention of the thoughts of his heart was only evil continually.” — Genesis 6:1-5“.

It was in the time of this great evil that God sent the Noah flood to wipeout demon-possessed man.

The Muslim Quran made what appears to be an eerie prediction: that Satan-worshipping man may ‘genetically’ transform creation.

The reference verses in Chapter 4 go:

116. Indeed, Allah(the One God) does not forgive association with Him, but He forgives what is less than that for whom He wills. And he who associates others with Allah has certainly gone far astray.
117. They call upon instead of Him none but female [deities], and they [actually] call upon none but a rebellious Satan.
118. Whom Allah has cursed. For he(Satan) had said, “I will surely take from among Your servants a specific portion.
119. And I will mislead them, and I will arouse in them [sinful] desires, and I will command them so they will slit the ears of cattle, and I will command them so they will change the creation of Allah(the One God).” And whoever takes Satan as an ally instead of Allah has certainly sustained a clear loss.
120. Satan promises them and arouses desire in them. But Satan does not promise them except delusion.
121. The refuge of those will be Hell, and they will not find from it an escape.

It appears that there is a demonic plan to reintroduce the scenario in the Bible quoted above, at the time of Noah’s ark, when demons married humans to make a superhuman giant species.

Alex Jones of infowars in the video clip below breaks down the hidden secrets in Riddley Scott’s upcoming film, “Alien Covenant,” and provides an abundance of references to show that the demonic transformation of the human being by the globalists who rule the world today, is an active process well under way.

Alex Jones explains that GMO food and other contaminants being fed to the populace are not by error but being done on purpose so as to promote an infinitude of new mutations in man that the globalists plan to harvest the best of. He explains that the masses are guinea pigs of these devil worshippers. He explains the fundamental concept that while they (the illuminati globalist rulers of earth today – Bilderberg Group et al) do not believe in God, they believe that Aliens or demons seeded life on earth and they plan to de-evolve the rest of us and waste us while evolving themselves into a superhuman humanoid being in suit with the devil.