Racism in Ghana and Africa; How I almost got killed Firstly, let me thank the Almighty for being here, alive and able to tell my story after my near death experience yesterday on the streets of Accra, capital of Ghana. Had I died, this tale may very likely have been told very differently.

I am a Nigerian and also a Ghanaian citizen, I had lived almost 20 years of my life in the United States before deciding to move back to Ghana 3 years ago, and all had been going on relatively well, I had been enjoying the clime and integrating peacefully till yesterday when as I drove along Achimota road in Ghana, a commuter bus headed on collision course for my jeep. I swerved to avoid the absent mined driver, honking as I did so, but he came on and crashed into my vehicle.

I stopped and protested, telling them we must get the cops over to resolve the accident. In the civilized world, when there is an accident, both parties wait there till the cops come and measure the parameters, if a mild accident, they exchange insurance information and leave. In Nigeria, they decide who is to pay, and in most cases the poorer person starts to beg. Not so here, the passengers and driver reigned insults on me and I must confess, I returned same at them. Now, though my accent is diluted, much American and a little Nigerian, they immediately associated me with Nigeria and cursed at me for this affiliation. The driver tried to drive off, but I blocked his car protesting that we must wait for the authorities. Had I known, I should have tucked my tail between my legs and driven off as a third class citizen in ‘their’ country.

The raging passengers of the bus started punching at my car and damaging it, then they came toward the front and shattered my wind-screen, and injured my Ghanaian passenger.

Next, someone shouted- ‘Armed robber’. A bell rang in my head. The shouts increased- ‘he is a Nigerian, a Nigerian armed robber’. Blood rushed in my ears as I saw my life flash before me. The mob had started advancing toward me, the ‘armed robber’. I stepped on the gas, and thank goodness, there was no traffic ahead, I sped away for dear life.

The series of events that would have occurred was clear- had I waited a minute longer or had my car stalled, I would have been lynched possibly to death, as a ‘Nigerian armed robber’. Just a few days back I saw a suspected robber lynched to a coma on the streets in no different than would have been my fate that lovely day.

In Africa, lynching on the spot is common once the tag- ‘robber’ is assigned, and being a Nigerian in Ghana quadruples the response and reaction. I learned a valuable lesson. Never protest for your rights in Ghana as a Nigerian, simply bow and run for your life meekly or you may not live to tell the tale.

There has been an increase of hostility and bigotry against Nigerians and to a lesser extent repatriate African Americans in Ghana. The reasons for this are multi-faceted- Poverty, frustration, lack of opportunities, relative success of foreigners to the common masses in the country, criminal behavior of some Nigerians and foreigners in Ghana and the like. To be frank, a good amount of armed robbers caught or killed in Ghana are foreigners and Nigerians. This is unfortunate but not a reason or justification for the increased hostility toward foreigners and hate crimes. Hate crimes are never justifiable, be they against Mexicans in America or Christians in Northern Nigeria.

Indeed the careful way we all know that Christians must tread in Northern Nigeria is now precisely how Nigerians must tread in Ghana. Be careful, be respectful, always accept fault, beg and run once temperatures flare or you are dead! Foreign Black Africans are also victims of this very wicked reaction that I call ‘racism’, even though we are of the same race in South Africa, where we have seen increasing hostility and violence against foreign Blacks by the indigenous Blacks due to similar discontent at what they believe is a take over of opportunities from them by the foreigners.

Back to Ghana, my Nigerian friend, also a repatriate from the United states said that last month, because of the expensive car he drives, his neighbors called the cops on him for suspicion of being a fraudster, aka 419. He was arrested at home and his house ransacked and his computer confiscated and thoroughly searched for any evidence of such activity. When nothing was found he was released.

Another friend, actually a Ghanaian, but one who had lived almost all his life in the UK was erroneously called a Nigerian and lynched on the streets till a Ghanaian lady who had lived in Nigeria for over 30 years came out of her car and risked her life to defend and free him from likely death.

These events are getting more rampant and are very unfortunate. Africa is for us all, and our various Nations support each other and should continue doing so. Ghana borrows, oil from Nigeria to support its economy and both Nations engage in activity that help each others interests. There is free travel between west African nations all part of ‘Ecowas’ because we have decided to remove barriers and recognize that we are one family. Africa has suffered enough from colonialism and European racism, we should not punish ourselves further by intra-racism.

Mob actions are very dangerous and the human being must be conscious of the results that are likely from a false accusation, even a whisper- ‘armed robber’ which has a potential magnitude to lead to the loss of innocent life. How will a youth, probably hungry and frustrated who makes such a call feel, knowing for the rest of his life that the wicked, false accusation he presented, or the first punch he threw led to the death of a human being, that loves him and was also facing similar frustrations.

I have gotten through the eras of severe racism in the United States, eras of the very infamous New york Mayor, Giuliani, who made Blacks secondary citizens. Now, to come to Ghana, a country I call home, and go through much more deadly discrimination is disheartening at the least and deathly frustrating.

The whole world is looking up to Ghana and proud of the Nation as one of the most stable, peaceful and progressive Nations in the world, but the rapid transformation occurring to Ghana is very discouraging, and a Nation we all hope could be a beacon and big brother to African Nations is slowly but steadily leading itself down the same path that it was before and that has destroyed many other African Nations. The path of wickedness, intolerance, corruption, material greed and desperation for power and wealth.

I pray the people who nearly lynched me and accused me of armed robbery will read this article that I hope Newsrescue and other media publishes and possibly realize how dangerous their activity was and the implications. Hopefully a discussion can arise and we all as Africans can learn to improve our behavior and accept ourselves as Humans, Africans and brothers.

After all it was the wicked colonialist who used rulers to cut our Nations into the pieces they are today, set up tribes to capture other tribes as slaves or risk having their towns burned down, and gave certain regions comparative advantages or disadvantages over others, hence instilling deep tribal hate lines in our society, prior to that we were bunches of integrating communities with no such boundaries and more love than distrust.

See: The Jewish Holocaust was precedented and superseded by Leopold’s 30M Holocaust of Africa’s Congo

Ghana is very unique in that there is only one population in Ghana that claims the longest local origin, these are the ‘Asante’, the ‘Asante warriors’. The Ga’s of Ghana are actually Nigerian immigrants said to be from Benin in Nigeria that migrated to Ghana. And the Northerners in Ghana are Hausa’s who emigrated to Ghana from all over North Africa. 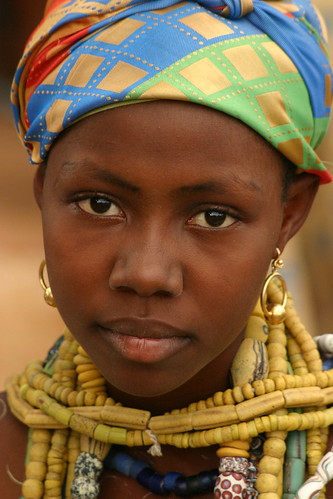 Ga tribe of Ghana, said to have immigrated from Nigeria

This is the story of most of Africa where people all migrated and intermixed to form the communities that exist today. Unfortunately even among Ghanaian’s there is ‘racism’, as the various groups do not get along with each other. Ghana being a very small nation makes the impacts of such more grave as compared to a vast Nation like Nigeria with over 500 tribes and the fault lines in Nigeria are usually more religion related than tribal. The last Presidential election in Ghana experienced an unprecedented in recent years high level of tribal-political violence, with harm to life and destruction of property especially up north as is described here:

Charred remains of houses, walls riddled with bullets, and burnt cars and are talismans of last week’s violence in the Northern Region’s capital of Tamale. Violence erupted following a shooting incident on 31 August that abruptly ended a political rally organized by the ruling New Patriotic Party.

A 12-hour curfew is currently in force… …Affected by the violence was Alhaji Mahama Jeboni, an opposition party chairman for the National Democratic Congress (NDC), who is based in Tamale.

His 30-year-old daughter, Sayakulu Mahama Jeboni told IRIN, “The attackers asked my father to choose between his life and his properties. There were about a hundred people all armed. They were arguing whether to burn the houses first or my father’s commercial vehicles. They set fire to all of his eight cars.” She said the flames razed their three homes to the ground. “Everything was burnt, all our possessions, possessions dating back to one hundred years. We have nothing left,” Jeboni told IRIN.

A Ghanaian advised in relation to the strong and oft. violent emotions of tribalism in Ghana:

Things a non-Ghanaian should never say or ask a Ghanaian:
(1) What do you think of JJ Rawlings- Depending on the ethnic group you’ll get a dirty slap or mind your business
(2) What ethnic group are you from- usually met with a silence unless you are very close with the person- Ghanaians have a paranoia of division.
(3)If you dare say- ‘Kwame Nkrumah was nothing’-lol- prepare for an early grave.
(5) ‘Hi Life music sucks’- again prepare for an early grave.

The world is moving ahead past an era of race, clan, tribe or religious discrimination, as classicism remains the main divider that unfortunately is gaining rounds. We all must come together as did Nigerians, Ghanaian’s, African Americans, ‘Whites’ and the like in the United States to delineate Black power and prowess and elect Barrack Obama as the president of the United States and in effect, the world.

I pray for Ghana, I pray for Africa, I pray for the world. But sometimes prayers are just not enough. Please tell someone to love his neighbor and tell him to tell someone else. One by one we can spread a message of love, and hopefully our children will grow to see a better world than we have today.