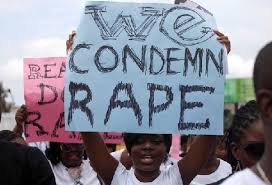 I was moved to tears as I watched raped victims and their families stood in the House of Representatives on Thursday, 23rd October 2014 to narrate their agonizing experience in the hands of rapists.

The victims, mostly young girls, pleaded for justice to be done on their plight and also called on government through the female lawmakers and their counterparts to expedite action and pass Sexual Offences Bill that is currently pending in both the lower and upper chambers with a view of sparing them the trauma they are going through.

The bill, if passed into law would spare other girls from being victims of such experience in future.

Rape, as defined by Oxford Advanced Learners Dictionary is “To force somebody to have sex with you when they do not want to by threatening them or using violence.”

The two major categories of rape we experience in Nigeria are: Gang Rape and Acquaintance rape.

Gang rape occurs when a group of people forcefully rape a victim while Acquaintance rape is committed by someone who knows the victim.

From the above explanation, if you have forcefully had sex with a girl without her consent, even if she succumbs to your sexual urge in that she has no strength to struggle with you, then one can term a rapist.

It is estimated that many women are raped or sexually assaulted than what statistics claims. Women have refused to come forward to narrate their ordeal because of the stigma surrounding rape and fear of reprisal attacks from their perpetrators.

From my relationship with ladies, especially victims of sexual abuse, they feel ashamed and most times see themselves for being the cause. Others will say they couldn’t open up because nobody will believe them.

Our nonchalant attitude towards rape cases in Nigeria has led to an alarming increase in cases of sexual abuse in our homes. This shameful act has made many married career women not to engage the services of female house helps in their homes; they prefer to bring their husband’s relatives to stay with them.

We have also heard stories of how men from all works of life took advantage of girls who were vulnerable before they could grant their request.

Many attribute these high increases of rape cases to the influx of uncensored movies, music videos, uncontrollable access to internet in our homes and drug abuse.

It is appalling and shameful that we don’t have stringent laws guiding rape victims. This has made perpetrators of such acts unrepentant and willing to explore more of such. National Assembly members should take a drastic action over the rising cases of rape and enact bill that will impose capital punishment on these perpetrators.

Whatever the reason, rape is evil. Let us all condemn and avoid this barbaric act perpetrated by wicked, selfish, inferior men who cannot control their animalistic instincts.

The woman you sexually abuse today may take it out on the society tomorrow.