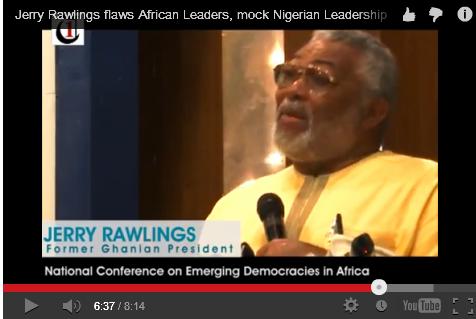 NewsRescue- In a PremiumTimes video of a speech given by former president of Ghana, Jerry Rawlings at the  Conference On Emerging Democracies In Africa: Challenges And Opportunities, which held June 17, at the Transcorp Hilton, Abuja, Nigeria, the president went hard on corruption in Nigeria, describing a lonely battle of a few great men of Nigeria and Ghana who battle corruption while being persecuted by “oga’s at the top.”

The video and full transcript of his speech is below: