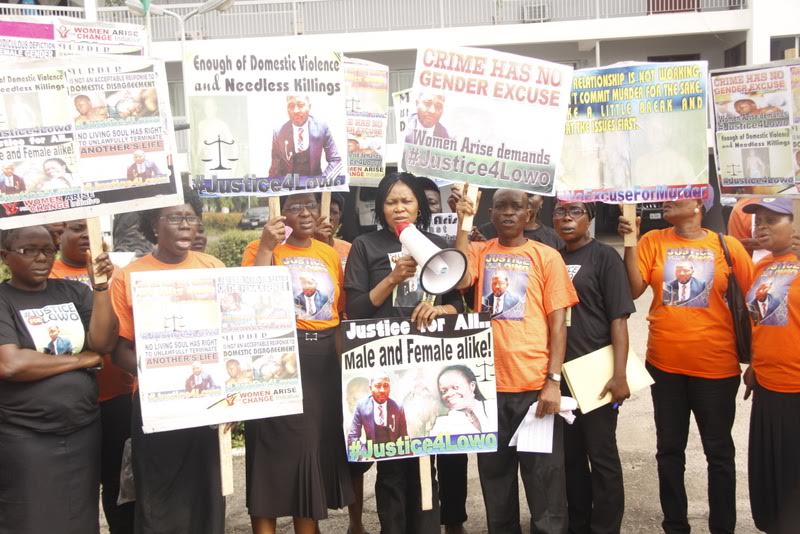 It was a gathering of lawyers, Women Arise member, friends, the media, family members when the trial of a lawyer Yewande Oyediran accused of killing the husband Oyelowo at the resumed hearing yesterday Tuesday 24th May, 2016 at the Ibadan High Court, Oyo State.

As the hearing commenced the foremost human right Activist, Dr. Joe Okei-Odumakin, stormed the court with her members. As the case commenced, the Director of Public Prosecution, DPP, Tajudeen Abddulganiyu announced his withdrawal from the murder case, he further named Sanyaolu Akinyele a State appointed public prosecutor as his replacement.

The family’s lawyer Yomi Aliu did not object. The lead defense counsel Bisoye Ashanike deferred to junior counsel in his team. Adegbite immediately objected to Akinyele’s appointment because according to him the DPP is just a title and only the attorney general has the legal backing to do so.

The prosecutor told the court the objection was baseless, stating that he knew about three cases in which Adegbite as a state counsel has argued in favour of such exercises in the past.

Ashanike further objected to the appearance of Bola Alabi from Femi Aborisade’s Chambers, who appeared for Women Arise, Justice Abimbola however overruled his objection explaining that the organization has a right to be represented.

In the application by Bioye Ashanike that the court should strike out the charges since they were instituted by the Oyo State Department of the Public Prosecution and not the State Attorney General. The application also raised the issue of jurisdiction.

After revisiting the application by the accused person, the judge dismissed the objection ruling that the case will commence on June 23rd and 27th , 2016.

Addressing the media after the court adjournment the president, of Women Arise, Dr. Joe Okei-Odumakin reiterate her position on the murder of Mr. Oyediran Oyelowo. And said the only ultimate conclusion in cases of grievous crimes as this, is justice. It is the only means to lasting peace after an injustice and best prescription for deterrence, to prevent recurrence from other intending perpetrators.
She further urged the law enforcement agencies to be objective and the prosecutors to engage in proper investigation. Uncovering actual cause of death and linking appropriate actions to antecedents will go a long way in helping humanity prevent repeat incidence in future.

She asserted that the organization remain at this time of grief with the family of Late Oyediran Oyelowo and assure that the nation is with you and mourns with you at this time.

In concluding, she urged all become ambassadors against domestic violence. Don’t be a victim and don’t be a perpetrator. Instead, be a peace ambassador.