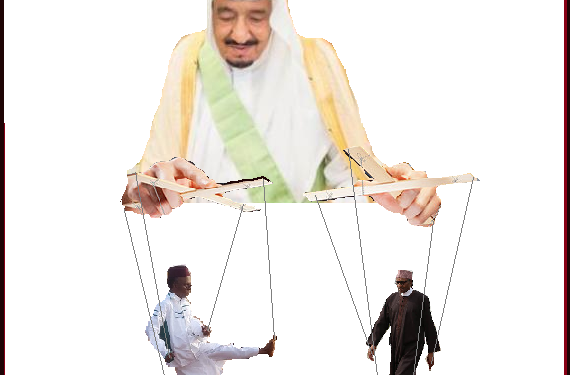 A brother sent me a message via WhatsApp about the above news report. I was shocked about the figure. What is $10m and how many Main Battle Tanks will $10m buy? Maybe just three (3) with their spare parts. $10m can not buy a single Jet Fighter. Do Saudi rulers think Nigeria is a Banana Republic? We should remember that this $10m is not just for purchase of military equipment but also for feeding of the Internally Displaced People (IDP). Nigeria has close to three million IDPs from the #BokoHaram insurgency.

When President Buhari sent the Army to Zaria on 12th – 14th December, 2015, where they brutally butchered 1000+ Shia infants, children, women and men, and wickedly dumped the dead bodies in mass graves at night to bury the evidences. Four days later President Buhari celebrated that brutal and inhuman genocide with the King of Saudi Arabia on phone. President Buhari and Elrufai-led Northern Governors hurried to Saudi Arabia tobe rewarded for the execution of the #ShiaGenocide.

With the defeat of #ISIS and #AlQaeda in Syria and Iraq, the Western-backed Saudi regime hurriedly formed an anti-Iran and anti-Shia so-called coalition “to fight terrorism”. President Buhari pushed Nigeria into this coalition as the Saudi king promised him massive funds for arms. Buhari and gang have been waiting for the promised “massive funds”. But when just $10m arrived Buhari and gang were disappointed. The Minister of Defense, Mansur Dan Ali, received the Saudi delegation. Dan Ali shamelessly told the Saudi delegation that they need more funds. The Saudi regime is bucked down in Yemen where the brave Yemeni Resistance is daily giving them bloody nose.

President Buhari has no single achievement for close to three years in power. To buy achievement President Buhari is busy paying BokoHaram huge sum of money as ransom to free abducted captives. Today Buhari is the biggest funder of BokoHaram terrorism. From all indication Buhari has outlive his usefulness to his imperialist masters. With the 2019 elections approaching, millions of Nigerians plunged into extreme poverty due to the cluelessness of Buhari and a more Bold and resurgent BokoHaram, Buhari is a gunner!

As students of history murderous criminals like Buhari, Elrufai, Buratai and gang always ended up as useless Liabilities to their imperialist masters. Countries like Iran and Russia would have help Nigeria destroy BokoHaram insurgency and unmask the wicked and evil masquerade behind this murderous killing machine but Buhari chose to allied with Saudi Arabia – the mother of ISIS, AlQaeda, BokoHaram and all murderous Wahhabi terrorist groups.

Our IDPs desperately need help as most of them sleep with hunger. The Nigerian Army is exploiting their condition by turning their women and girls to be their sex slaves in exchange for food and essential commodities. We call on the international community and good people with conscience to help our suffering IDPs.

On a final note, we call on President Buhari and gang to obey Court order and FREE Sheikh Zakzaky and his wife from more than two years illegal detention incommunicado. Your Saudi masters just treated you as useless dogs.