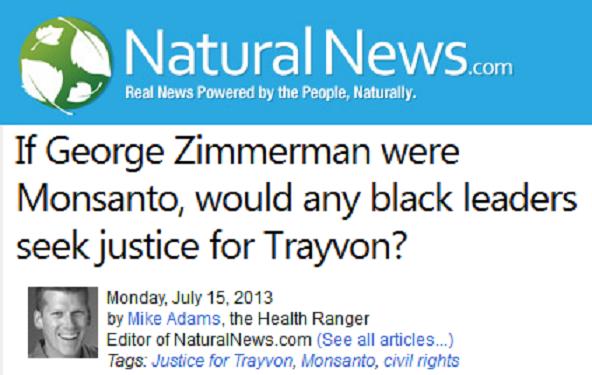 NewsRescue– We have been real fans of Natural News and Alex Jones’ Infowars, and we hope to still retain being allies in our common causes against big corp, big government and the 1 percent, however your recent article published on Natural News and broadcast by Alex Jones, really disappoints.

On July 15th, in relation to blacks protesting the senseless judgement in favor of George Zimmerman, the half white, half Hispanic hunter, who poached 17 year old Trayvon martins, Natural News’ author Mike Adams asked if blacks would respond as they have been if Zimmerman was Monsanto. See: If George Zimmerman were Monsanto, would any black leaders seek justice for Trayvon?

Dear Mike Adams, Natural News and Alex Jones. We did, we do and we will. And we are not just referring to the fact that blacks have always been present in large numbers in all people’s protests against Monsanto, other GMO’s and big corp. We are referring to one of the most serious actions against Monsanto in history. Perhaps you did not know what happened in Haiti in 2010:

“A new earthquake” is what peasant farmer leader Chavannes Jean-Baptiste of the Peasant Movement of Papay (MPP) called the news that Monsanto will be donating 60,000 seed sacks (475 tons) of hybrid corn seeds and vegetable seeds, some of them treated with highly toxic pesticides. The MPP has committed to burning Monsanto’s seeds, and has called for a march to protest the corporation’s presence in Haiti on June 4, for World Environment Day. Read more…

That was real action. Highlighting this for you is really depressing, because this is precisely what the 1% wants–to create divisions in the 99%, so they can tear us apart.

One of the world most prolific crusaders against GMO’s and environmental polutionists, Nnimmo Bassey, director of “Health of Mother Earth Foundation,” who hails from Nigeria, is hopefully familiar to you. He, a black leader has led hundreds of events against big farm. See: Do Not Force-Feed Nigerians With GMOs, as recent as this June.

During the global MSM blackout on the millions marching against Monsanto this year. NewsRescue as a sepia managed non-aligned media, did our part to broadcast the marches to our audience. See: NewsRescue-Media Coverage Blackout Over Anti-Monsanto Protests: “GMO Must Go!”

Perhaps Zimmerman shooting and killing Trayvon martins in his hunting escapade was a false-flag to create this predictable divide among darker and lighter skinned minorities, don’t you think?

Need we go on? No, that would be stupid and would degenerate us to the level you decided to descend to. We call on Natural news and Alex Jones’ Infowars, to apologize for their emotional outburst against sepia and brunette citizens, so we can together get back to the drawing board and keep up more important missions of our mutual interests.

So if Zimmerman were Monsanto, Blacks will….