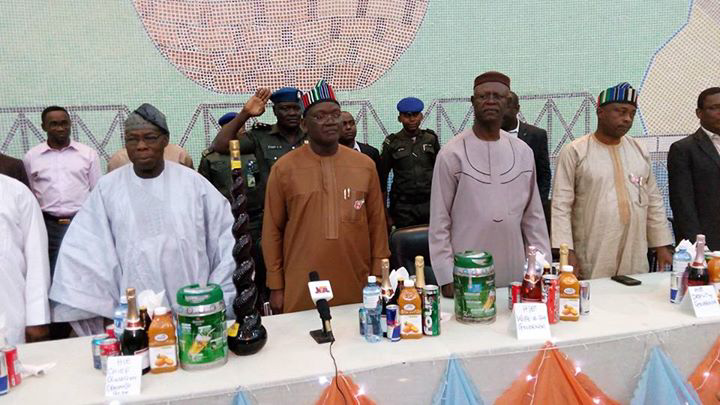 Only a fortnight ago, former president of Nigeria, Olusegun Obasanjo, visited Benue state where he spent three days in the state as a guest of the state governor and was amongst other things hosted to a state house dinner.

The former president, who was claimed to have come into the state for academic purposes, was welcomed at the airport by the Chief of Staff to the Governor even as the governor had taken off that day for Abuja but the Deputy Governor was in town.

Revelations have however emerged that contrary to claims by the crafty former president saying he was in Benue in pursuit of a doctoral degree; Obasanjo came to Makurdi for other reasons unconnected to education or even the doctoral claim.

According to insider sources the former president whose trip was all expense paid by the embattled former governor of Benue State, Gabriel Suswam was in the state on his request to intercede and plead with the state governor, Samuel Ortom in consideration for a plea bargain.

The former governor who is under intense heat and pressure in the state for misappropriation and financial recklessness by his administration is said to have visited the former president in company of his wife Arc. Yemisi Suswam, who prevailed on Egba chief to mediate on behalf of her husband.

Although the outcome of the meeting between Ortom and Obasanjo is yet to be ascertained, it is believed that the state governor who is bitter at his predecessor, was indisposed to the meeting, a reason why he decided to send his Chief of Staff to welcome Obasanjo and only decided to see him two nights into the visit.

However further revelations have emerged that the meeting mat have given birth to the recent truce meeting which held between the duo at the Presidential lodge in the Benue Peoples House, where Suswam was accompanied by the state Christian Association of Nigeria (CAN), president.

Suswam is said to have before these meetings, called on the General Overseer of the Redeemed Christian Church of God (RCCG), Pastor Enoch Adeboye, where both his wife and the state governor are deacons, to prevail on Ortom to halt the ongoing probes into his administration.

The said meeting was said to hold during the 13-14th November, Holy Ghost convention which held in Abuja where the state governor was said to have told the Man of God he hadn’t any grouse against his predecessor save for the squander of the state’s wealth.

Suswam is said to have also approached an influential Chief Justice of one of the North Central states to intercede on his behalf, however the said legal head had declined the appeal stating that the former governor had not met their bargain in earlier engagements when he helped influenced the judgement in the Suwam Vs. Ugbah governorship tribunal case.

Meanwhile these meetings may not be the first of efforts by Suswam to avert the long arm of the law since his exit from office as he is believed to have after his loss and that of his anointed governorship candidate, had rushed to the house of the state All Progressive Congress (APC), leader Sen. George Akume to seek a soft landing where he was even believed to have committed a certain sum of money to the pursuit of the latter’s failed Senate Presidency pursuit.