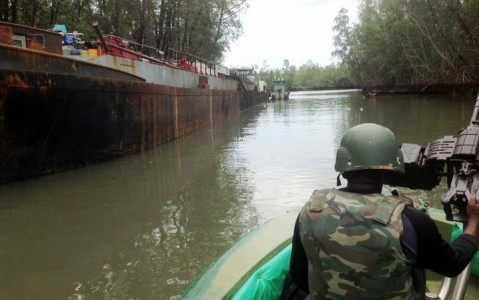 Who are the real criminals behind the continuous thievery currently
experienced in the Nigerian crude oil pipeline transportation network?

This was the same question that struck my inquisition weeks ago,
prompting me into carrying out a brief but vivid investigation into
this lingering theft perpetuated by the finest of Nigeria’s smartest
miscreants. Ordinarily, I would not bother writing or risking
investigating into such susceptibly privy and vulnerable unrelatable
covert but economic sabotaging venture if its adverse effect had not
crippled into bothering on my personal economic life and that of the
careers of many Nigerians and the economic growth of the Nation at
large. Indeed, oil vandalism, been the bedrock of our National Income
has come to affect every sphere of our diverse economic lifestyle.

Who are the real buccaneers dominant in the Pipeline
vandalism/thiefdom business in Nigeria? Certainly, with the current
political tension coupled with the fact that we have a President who
coincidentally happens to be a son of Nigeria’s deadliest creeks and a
former negotiator of the then FG and the then Militants of the Niger
Delta area. One would be swift enough to conclude that the present
Government has no political will to stop pipeline vandalism due to
personal reasons which might be in favour of the oil producing
regions. No one else could have known the Niger Delta waters better
than the present President and his team of Niger Delta technocrats in
the current administration.

However, after my brief research into the lingering oil theft, I have
decided to number my findings in the following manner.

1.      Nigeria’s oil is stolen on industrial scale not because the head of
the government is weak but because the arms of government responsible
for the security of this section is deeply corrupted and cannot be
said to represent Government interest in its duties anymore. Stolen
crude oil leaves Nigerian shores daily because the Nigerian Navy is
corrupt! The Nigerian Navy is the compromised inferentialist between
the crude oil thieves, the government and the transportation medium
through which the stolen crude is exported. The Nigerian Navy seems to
be the most corrupt in the world! They are in fact the real
transporters of stolen oil in Nigeria. They not only collect money
from the vandals and look the other way; they also ensure the oil
leaves Nigeria without any security barrier. And obviously, they get a
higher pay for their additional services. This is what the Nigerian
Navy does. From the Admiral of the fleet to the lowest acting
sub-lieutenant of the Navy, corruption smells. This illegality in the
Nigerian Navy has been so smartly officialized that even a lieutenant
pays heavily to be posted to the Niger Delta waters. Off course he
knows what he intends to get from these waters. Oil bunkering is not a
child’s joke; its serious business with continuous innovation been
applied daily! This old corruption problem in the Nigerian Navy laid
one of the basic foundations that have given growth from what we knew
as small and medium scale roadside bunkering into the present full
scale industrial buccaneering of Nigeria’s rich crude oil. Please ask
a Navy friend to tell you more. At least, he could be more sincere to
you as a friend than he is to his country and employer Nigeria.  The
Nigerian Army is their colleague in the small and medium scale sector
(local land operations), but theirs is petty business compared to what
the Navy guys are making; all at the expense of our National Economic
Growth. These are the supposed Government representatives in the fight
against illegality. Now, who truly is the government? Is it Mr.
President who resides at Abuja and relies on field reports and
statistics from the security arms or the security arm that works on
the field and manipulates datas to suit their dirty and unpatriotic
behaviours? Who now seem to be the real enemy of the people’s progress
and who now seem to be the real government? May God Bless the Nigerian
Navy for their selfless service!

2.      Our Nigerian ‘brothers’ whom the Nigerian Local Expatriate Quota
Law has helped to become Managers in the multi-national oil companies
have become saboteurs sabotaging our very own pipelines. Yes, it is
Nigerians working with these multinationals that has become the main
facilitators pioneering the illicit bunkering business.  With the
number of technologies at the disposal of these multinational oil &
gas companies, they still cannot detect an immediate specific point
where the new line has been breached. It is not that these
technologies aren’t working; it is just that Nigerians are
manipulating the machines to seem so as to explore the illegal
business and increase their breaking points. They don’t give a fuck
about their employer or the Nation that has made laws that made them
what they have become. In fact, oil bunkering moved to industrial
scale when Nigerians began to hold key positions in production and
marketing units of these oil companies. These were positions reserved
for foreign expatriates and which our (then) lawmakers fought to
ensure Nigerians occupy these positions. Of course, Nigerians are now
Production Managers, Land Area Managers, Logistics Manager, etc and
oil bunkering has suddenly moved into industrial scale. Why would a
production manager who observes the drop in production PSI not shut
down production on that flowline and carry out at least an aerial
surveillance to observe why the flow of crude has dropped? Its
obviously because he is the ghost man that vandals the pipes and makes
sure nobody goes out to find out what happens. Just investigate their
bank accounts and you will understand the logic and come to a
conclusion that what our politicians make is peanut compared to what
these guys are milking from our pipes! May God bless our Nigerian
brothers who has become ‘big men’ in the multinational oil companies
and are using their positions to dehydrate our National treasury!

3.      Every successful business man in the bunkering business must
manipulate these two class of people I have mentioned above to become
successful. You cannot smuggle out the oil without the Nigerian Navy
and you cannot tamper with the pipe line without the knowledge of our
Nigerian ‘brothers’ in the NNPC and in the multinational oil
companies. If you don’t consult these two guys, you have not started
bunkering business! Even the local small scale type of bunkering still
requires at least the services of one of the above to be successful.
Without these two guys, there is NO BUSINESS in crude oil theft!

My recommendations to the solution of Oil Bunkering in Nigeria

While it is true that it is difficult, if not impossible for these
miscreants to be detected and prosecuted. It is equally true that the
growth in Nigeria’s gas sale has seen immense progress over the last
few years. Nigeria exported some 19.6 million metric tonnes of
Liquefied Natural Gas (LNG) last year, which makes us the fourth
largest supplier of gas worldwide! If the Federal Government cannot
eliminate these evil eggs amongst its machineries, then it can as well
declare its crude oil as reserve, shut down crude oil production and
focus on the sales of gas! At least, lets see how these bastards can
tamper with gas pipelines and get away with it alive. And lets see how
they can successfully transport the stolen gases to Russia and
Germany!

My recommendation above might sound ridiculous but it the best option
I can think of for now. Nigeria will not go broke if it declares its
billions of untapped crude oil as reserve and diversify its economy.
There will be no job loss if it is properly planned.

Mr. President should try to kill people (if he has to) to make sure
things work out right in this country. If I were the President of this
country (civilian or military), I wouldn’t have time to drag murderers
to court when the evidence is obvious. Just put a bullet in their head
and the country moves forward! After all, Mr. President ought to be
the most powerful man in Nigeria (thanks to the constitution), I see
no reason why he has refused to use such powers in fishing out the bad
eggs in the military, the civil service, the multinationals, etc and
take this country to the next level.

I will end my write up with the words of Theodore Roosevelt which
reads ‘..here is (y)our country. Cherish these natural wonders,
cherish the natural resources, cherish the history and romance as a
sacred heritage, for your children and your children’s children. Do
not let selfish men or greedy interests skin your country of its
beauty, its riches or its romance… Patriotism means to stand by the
country. It does not mean to stand by the president or any other
public official, save exactly to the degree in which he himself stands
by the country. It is patriotic to support him insofar as he
efficiently serves the country. It is unpatriotic not to oppose him to
the exact extent that by inefficiency or otherwise he fails in his
duty to stand by the country. In either event, it is unpatriotic not
to tell the truth, whether about the president or anyone else”.

Views of author may not represent NewsRescue official editorial policy