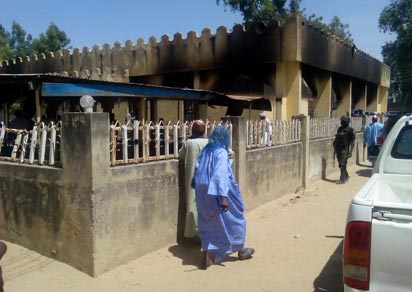 Wukari—Daring gunmen, yesterday, defied the dusk-to-dawn curfew and attacked Gidan Aku community on the outskirts of Wukari Local Government Area of Taraba State, killing no fewer than 50 persons and injuring many others.

The attackers, armed with sophisticated weapons allegedly came from Nasarawa State through the plains of Benue River and descended on their victims while the residents were asleep.

According to a lawyer in the community, Luka Agbu, the “attackers were very hostile to us and did not spare even children or the aged.

“The attackers shot at people and burnt houses at the same time without any intervention by the security forces. We are helpless here and we plead with the Federal Government to deploy special troops to rescue us from this unfortunate and deadly attacks.

“Our people are being killed by gunmen, we are losing property on a daily basis. What kind of a country is this?” Agbu queried.

But as the dust began to settle, a contingent of soldiers and anti-riot policemen were drafted to Wukari community to contain the situation although most of the community members had deserted the area for fear of further attacks.

In the meantime, acting Governor of Taraba State, Garba Umar, has warned the people of the state to desist from politicising the current spate of violence and join hands with government in finding a lasting solution.

Addressing journalists Wednesday, Umar said that the lingering insurgency in four local government areas of the state was not peculiar to Taraba but was a national crisis affecting no fewer than 15 states of the federation.

While regretting that the attacks have seriously affected the state, Umar announced the deployment of 50 more soldiers from Yola to assist the ones on the ground in quelling rising violent attacks in the state.

“Information available shows that the insurgents came from Nasarawa State and they camped at the Coast of River Benue close to Ibi”, the governor said.

“We have deployed 50 soldiers from Yola to add to the troops on the ground who were deployed from Serti and Takum and with a reasonable number of policemen on the ground, we hope the situation would improve.

“We have concluded arrangements on how to visit the internally displaced persons and render immediate succour to them. That is why we have dispatched 28 trailers laden with relief materials to the affected LGAs.

‘I have ordered that despite the curfew in Wukari, the General Hospital there should be open for the treatment of the victims of the crisis. The 24-hour curfew earlier imposed in the area had been relaxed and would be in force from 12 noon to 6 a.m.,” the governor said.

“We remain committed to the security and well being of the public. Unfortunately some people are using these security challenges to achieve political goals. Security of our dear state is too sensitive to play politics with,” he said.

The Acting Governor sympathised with four women who delivered at the Mutum-Biyu refugee camp and promised that government would render free treatment to every victim of the attacks in the area.

The deceased were returning to Gudumbali from Maiduguri, the Borno State capital, when their vehicle was ambushed near Mafa town.

According to an eyewitness and resident of Mafa, Babagana Usman Mafa, “the insurgents blocked the road with wood and tree branches, after identifying occupants of the vehicle, the gunmen shot them on the spot, and fled towards Dikwa, a border town with Cameroon.

“The party chairman alongside other passengers in the ambushed vehicle, were first stopped by flagging down the driver for identification, before three gunmen on motorcycle shot dead two people at close range; and fled towards Dikwa,” Usmani said in a telephone chat Wednesday in Maiduguri.

He said the gunmen did not rob the party officials, as their vehicle was abandoned at the scene of the incident, adding that the road was also closed for two hours by soldiers and policemen to prevent further attacks.

On whether other vehicles were ambushed during the attack, he said: “These gunmen could have targeted the APC officials returning to the council area of Kala/Balge, before they were ambushed on that road leading to Gudumbali, the council headquarters.”

When contacted for confirmation over the incident, yesterday, in Maiduguri, the Borno State Police Public Relations Officer (PPRO), DSP Gideon Jibrin’s phone number could not be reached, but a security source who is not authorized to speak on the matter said “armed hoodlums ambushed a vehicle on Dikwa Road on Monday; and two people were feared dead, before the security agents closed the road for two hours to prevent further attacks”.