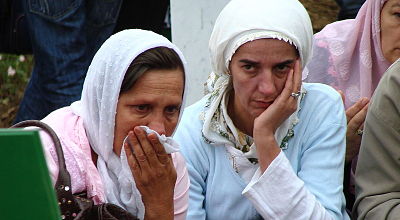 Blessed Prophet Moses barely went up the mountain, than his people lost direction and melted the gold he had instructed them to collect and all their jewelry and turned it into a golden cow to worship! And his own brother, Prophet Aaron was among them when they resorted to the idolatry, and he said they would have killed him had he not complied. [Exodus 32] [Quran 20:85-89 and Quran 7:150]

Blessed Jesus the Messiah had not yet departed, than of his disciples he was betrayed by one. And shortly after he left, there was such a sharp rift between his disciples, and his main disciple Barnabas took Mark and separated ways with Paul who took Silas as the disagreement on issues was so huge. Barnabas had wanted to take John, also called Mark, with them, but Paul did not think it wise to take him, because he had deserted them in Pamphylia and had not continued with them in the work. They had such a sharp disagreement that they parted company. Barnabas took Mark and sailed for Cyprus, and Paul chose Silas and left. [Acts 15:37-39 ]

As Blessed Prophet Mohammed lay on his death bed, he asked for a pen and paper to write a Hadith (statement) as a Will of guidance, but Umar RA and some other of his followers said he must have lost his senses out of severe sickness, saying that Muslims did not need any other written statements (hadith), “the Quran is sufficient,” and refused to give him the writing material. Those with him in the room quarreled so loud about whether to oblige him or not, that he had to kick them all out of the room. [Bukhari Volume 7, Book 70, #573 and Muslim 013:4015] The Prophet was not yet laid in the ground than more quarrels broke out on his succession and his burial was delayed two days and two nights while some of his followers resolved who to make his successor and how to pray on and bury him. The disagreements continued with Caliph Ali of his blessed family refusing to swear allegiance to the selected successor till at least 6 months later, after burying his wife and the Prophet’s daughter at night in secret so Abubakar RA, the selected leader of Muslims and others would not attend.
Hadith: “Ali sent someone to Abu Bakr saying, “Come to us, but let nobody come with you,” as he disliked that ‘Umar should come, ‘Umar said (to Abu Bakr), “No, by Allah, you shall not enter upon them alone” Abu Bakr said, “What do you think they will do to me? By Allah, I will go to them’ So Abu Bakr entered upon them, and then ‘Ali uttered Tashah-hud and said (to Abu Bakr), “We know well your superiority and what Allah has given you, and we are not jealous of the good what Allah has bestowed upon you, but you did not consult us in the question of the rule and we thought that we have got a right in it because of our near relationship to Allah’s Apostle.” [Bukhari Volume 5, Book 59, # 546]