This is a second call for the immediate sack of Chief of Army staff, Lieutenant General Tukur Yusuf Buratai for the atrocities and grave crimes against humanity committed by the army under his direct command in the days of December 12th to the 14th of 2015.

The description of the demonic acts perpetrated by the army as laid down by attorney for the family, respected “change” senior advocate Femi Falana are chilling, disturbing and sickening.

According to the narration of events by surviving daughter Suhaila and attorney Falana, General Buratai sent his men to the home of Zakzaky without a court order for Zakzaky’s arrest and out of the jurisdiction of the military.

Buratai’s “illiterate” armed hooligans in uniform burned down Zakzaky’s home in attempt to murder Zakzaky, his wife, children, relatives, friends and everyone else in and around the building. We have viewed videos of the aftermath.

Zakzaky’s elder sister was killed in the above process. Sheikh Zakzaky, his wife Zeenat and their sons and Suhaila survived the burning down of their home, hidden in the “basement.”

The soldiers then went there the next day to check and confirm that they had succeeded in murdering Zakzaky and his entire family. It was then that they found the family survived. The soldiers then murdered three of Zakzaky’s sons in cold blood in the view of Sheikh Zakzaky, Suhaila and Zeenat. The soldiers rained bullets on everyone in there hitting Zakzaky six times. His eyes were struck. Zeenat was also shot at least two times with shots to her abdomen and leg. Both were beaten, and further maltreated.

Near death and blinded Zakzaky was dragged on his behind and loaded in a wheelbarrow in typical Daesh style. They were all taken to secret detention and left to suffer and die and treated as the army so desired, denied their constitutional rights and access to their attorney’s, a judge and their medical specialists.

The bodies of the murdered sons, sister and other family members along with hundreds of other victims were carried away like animal carcasses and mass buried.

Zakzaky and wife Zeenat have since been detained extrajudicially and held incommunicado, denied access and information and prevented from seeking justice. 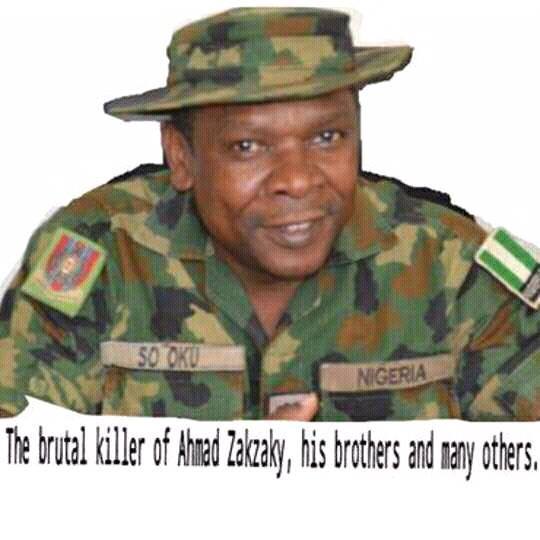 In additional shows of power drunken lunacy and radical fanaticism, Buratai’s possessed men under his and the orders of the administrator of Kaduna, demolished all other properties of the Zakzaky and went further to even exhume graves on his sons killed a year earlier, reportedly by Captain S.O Oku under Jonathan’s command and discarded these bodies in unknown mass graves. Some were burned.

This being the same Buratai that is unwilling and unable to accost a single of openly marauding armed Fulani herders who are brazenly above-the-law, terrorizing and killing innocent people in hundreds, burning down entire communities and even firing shots at serving Senators.

While General Buratai’s observing his paid duty to defeat ragtag, jungle hiding, heroin addicted Boko Haram terrorists is appreciated. It must be recognized that just the way we do our jobs, so also did Buratai do his. Any military leader is expected to be able to defeat terrorists, unless he is corrupt and compromised as were the past generals who were being paid by the survival of Boko Haram. Even the Civilian JTF used to roundly defeat Boko Haram terrorists when unhindered by Shettima and Jonathan.

We do recall that when Azubuike Ihejirika decided to crush Boko Haram in 2013, he did so easily, killing Shekau I and freeing all local governments under them, before he was ordered to stop and allow them recover their losses. To this effect, we believe Buratai’s salary is all he deserves for performing his duty to command the army to do their bidding against the terrorists and finish up the job Jonathan had done in his last months pre-election; and it is time he hands over that duty to other well qualified officers and is retired to face his charges for this act of unsurpassed bloody barbarism.

Nigeria’s north has suffered enough of God’s Wrath. We are tired of God punishing us with Boko Haram and making us the most disgraced land on earth. We are tired of the extreme poverty, shops burning, kidnapping, cattle rustling, kidnapping, desert encroachment and all other afflictions that God uses to punish us when we exhibit and allow and support this wickedness and oppression of the highest degrees against minorities in the north, Igbos, Christians, Shia and whoever else.

Please fire Buratai now and let him face his charges and free blinded Zakzaky and his beautiful wife who has lost six of her seven sons to Buhari and Jonathan and is not even able to bury them. This is not the “change” we fought and voted for.