A report by the Natural Resource Governance Institute captioned “NNPC still holds blank check”  revealed that during the first six months of the “change” Buhari administration, the NNPC withheld over $4.2 billion out of a total of $6.3 billion realised from crude oil sales.

Despite reforms by the Buhari administration the NNPC only transferred $2.1 billion to the Federation account, withholding 66% as a blank check. Money it was not obliged to account for how it spent.

The report said the unremitted revenues during Buhari’s first six months was actually about 14 per cent more than the amount withheld for the last six months under the Goodluck Jonathan administration and pretty much as much as has been withheld over the years or a bit more than some years past.

“Under Goodluck Jonathan in the first half of 2015, and 12 percent higher than the share withheld in 2013 and 2014. Go back a decade, and the numbers nearly flip: in 2005, NNPC sent 68 percent of its oil sale earnings to the Federation Account and kept only 32 percent.” 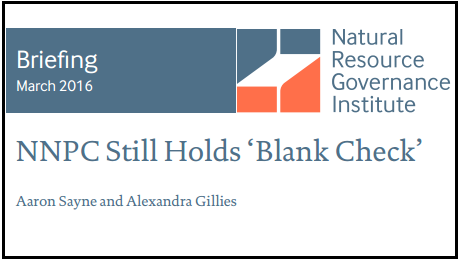 The report advised that “the government should move to curb the corporation’s discretionary, unaccountable use of much-needed public funds.”

The report acknowledged positive steps by the Buhari-Osinbajo government but insisted that the administration isot yet to address “how NNPC retains revenues—the practices that led to the “missing billions” accusations of recent years. NNPC sells around 1 million barrels of oil a day to a range of buyers.”

Trying to figure out where the money went, the report described the NNPC as a liability to Nigeria.

NPDC was reported to be one of the nation’s black boxes. The corporation controlled $1.5 billion in oil sales but the report found no evidence of remittances from it to the federation account.

“But we have seen no evidence that proceeds from NPDC oil sales enter the treasury. Instead, they are spent in an unknown manner. In one especially questionable case, we found evidence that NNPC has retained all earnings from the offshore Oil Mining Lease (OML) 119, a field owned wholly by NPDC that produces around 30,000 barrels per day of Okono grade crude. This stream of oil was worth an estimated $12.3 billion over the past decade.15 Leadership has talked about “re-kitting” NPDC so that it controls an even larger share of total production, meaning that the scale of unaccounted for money could increase.”

From domestic sales, NNPC was found to have withheld 46 percent of available domestic crude revenues in its first months under President Buhari; this in contrast with the 35 percent kept back in the opening half of 2015.

The report frowned at the allocation of $4.2 billion in six months to the NNPC for unknown expenses which raised questions about fiscal responsibility.

The report suggested more serious transparency and accountability for the State oil corporation and the elimination of domestic allocation.

The Institute listed some key items to watch out for:

1 Will the size of NNPC’s reported withholdings from oil sale earnings shrink?

2 Will the government adopt an explicit, enforceable rule governing which revenues NNPC can withhold, either in the PIB or elsewhere in its reform plans?

3 Will NNPC announce new financial controls and transparency measures for its subsidiaries, especially NPDC, the trading companies and PPMC?

4 Will NNPC replace the domestic crude allocation with a less costly and opaque alternative?

The full PDF report can be downloaded here