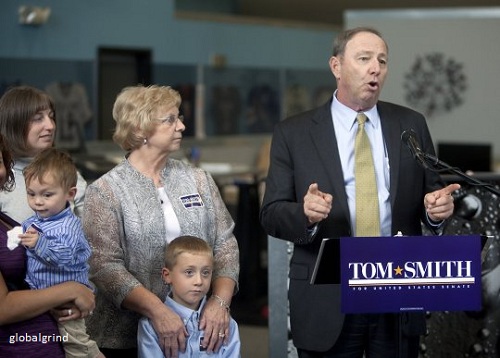 The Republican nominee for U.S. Senate in Pennsylvania today suggested that a woman who was impregnated by a rapist faces a similar decision to one contemplating whether to give birth to a child out of wedlock.

Tom Smith, who opposes abortion in all circumstances and is challenging Democratic incumbent Bob Casey, later sought to clarify his comments. He said he didn’t intend to compare out- of-wedlock pregnancy to one resulting from rape.

Smith’s comments in Harrisburg, Pennsylvania, were in response to a question about how he would react if a rapist impregnated his daughter or granddaughter, according to the Associated Press.

“I lived something similar to that with my own family, and she chose the life, and I commend her for that,” Smith said to reporters at the Pennsylvania Press Club, according to the Associated Press. “She chose the way I thought.”

He said the similarity was that the family member had “a baby out of wedlock.”

On a follow-up question, Smith sought to clarify his comments, saying he wasn’t comparing decisions raised by rape and out-of-wedlock pregnancy.
’A Father’s Position’

His communications director, Megan Piwowar, wrote in a statement: “Tom Smith is committed to protecting the sanctity of life and believes it begins at conception. While his answers to some of the questions he faced at the Pennsylvania Press Club may have been less than artful, at no time did he draw the comparison that some have inferred. When questioned if he was drawing that comparison, Tom’s answer was clear, ‘No, no, no.’”

Akin apologized for his Aug. 19 comments while rejecting calls from party leaders, including presumptive Republican presidential nominee Mitt Romney, that he drop out of the race against Senator Claire McCaskill. She had been rated by political analyst Charlie Cook as one of this election’s most endangered Democratic incumbents, though polls since Akin’s comments have shown her leading him.
Underdog Candidacy

Smith is the underdog in his race against Casey, who opposes abortion and has called for Roe vs. Wade — the 1973 Supreme Court decision legalizing the procedure nationwide — to be overturned. A poll released today by the Philadelphia Inquirer shows Casey leading Smith by 19 percentage points.

Republicans gathered in Tampa, Florida, for their party’s national convention this week say that November’s election will turn on the economy, not on social issues. Barbara Comstock, a member of the Virginia House of Delegates, said at a Bloomberg Insider magazine breakfast today that the top three issues are all the same — “economy and jobs.”

To contact the reporter on this story: Jonathan D. Salant in Tampa, Florida, at [email protected]

To contact the editor responsible for this story: Jeanne Cummings at [email protected]