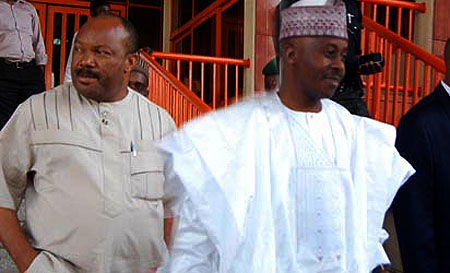 NewsRescue – In lackadaisical attitude and betrayal of an anticipating Nigeria, the judge presiding over the trial of Representative Farouk Lawan and Boniface Emenalo, Mr. Mudashiru Oniyangi absconded from court today, November the 27th to “attend a graduation party” in replacement of another judge who was allegedly not there.

Farouk Lawan is standing trial alongside his Vice Chairman, Emenalo, on a seven-count charge of obtaining N625,000 (N94 million) bribe from Femi Otedola, the Chairman of Zenon Petroleum and Gas Ltd.

Justice Mudashiru Oniyangi, rather than preside over this important case of national urgency, went to allegedly represent a chief Judge at the Nigeria Law School, Bwari 50th anniversary party.

NewsRescue is unable to determine if the judge has been bribed by the Rep, however such happenings do occur in the Nigerian system. the case has been successfully adjourned several times already.

Nigerians have been expectant of this trial as the lawmaker now popularly referred to as Farouk-the-crook, still occupies his position in the Nigerian House of representatives and has not even been suspended from office and pay pending his trial for a clear case of bribe in which there is public video recording.

Femi Otedola who is also accused of offering bribe by Nigerians and whose Zenon oil is among listed firms on the fraudulent oil subsidy case is expected to be prosecuted for numerous crimes, however the unnecessary delay in the trial for Farouk lawan who has asked for indefinite adjournment, which he is almost achieving with the corruption in Nigeria’s judiciary is a blow to the nation.

Nigerians will again have to earnestly wait for March 12th, 2014 for this very important trial and expected conviction.