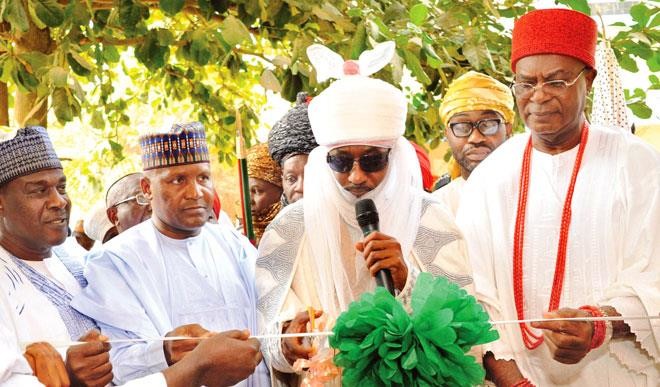 Members of the Kano State House of Assembly are at daggers drawn with the speaker, Kabiru Rurum, over N100million bribe allegedly offered to them by billionaire business man and chairman of Dangote Group, Aliko Dangote.

DAILY NIGERIAN reliably gathered that Mr Dangote offered the legislators the money in order to shelve probe of the Emir of Kano, Muhammadu Sanusi II.

The emir, who was initially investigated by the Kano State Public Complaints and Anti-Corruption Commission for alleged misappropriation of Emirate Council funds to the tune of over N4billion, is a close friend to Mr Dangote.

On May 10, the Assembly took over the commission’s probe and set up a 7-man committee to investigate the monarch.

But on May 22, the Assembly called off the probe, following a letter by the state governor, Abdullahi Ganduje, pleading for discontinuation of the investigation.

The governor had cited the acting president, Yemi Osinbajo and Mr Dangote among the notable Nigerians who pleaded on behalf of the emir.

Some of the aggrieved members of the Assembly who spoke to DAILY NIGERIAN on the condition of anonymity said the billionaire mogul had offered the money to the Speaker to share among members but the speaker cornered the money alone.

Some of the aggrieved members of the Assembly who spoke to DAILY NIGERIAN on the condition of anonymity said the billionaire mogul had offered the money to the Speaker to share among members but the speaker cornered the money alone.

“Immediately after we announced the setting up of a committee to investigate the emir, Dangote offered the money through the speaker.

“But Speaker collected the money and kept mum without even informing the principal officers. We thought he had not collected the offer but the bubble bursts recently,” said one of the aggrieved members.

According to him, the speaker had also collected money from other “interested parties” who wanted the emir deposed.

He said the principal officers of House had set up an internal committee among themselves to investigate the speaker.

Contacted, spokesman for Dangote Group, Tony Chiejina, declined comment on the matter, saying “I am at event now and I can’t talk.”

Sources at the state anti-corruption commission said the agency had discreetly continued with its investigations after the assembly announced suspension of its probe.

“So far we have almost concluded our investigations and we will present our report to the governor soon,” said a source who preferred not to be named.