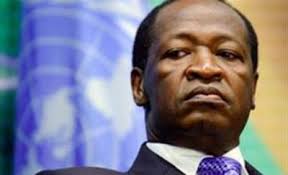 Tens of thousands of angry protesters have continued to demonstrate in the government center in Burkina Faso’s capital, Ouagadougou despite moves by the country’s leadership to end the unrest, according to RT News.

Earlier today the country’s communications minister, Alain Traore, stated that the government had suspended plans to make constitutional amendments, which would allow President Blaise Compaore to run for a third term, and after 27 years of rule.

However, protesters dismissed the gesture and are now calling for the President to resign immediately.

“It is over for the regime,” demonstrators shouted after Traoré’s announcement. “We do not want him again.”

General Honore Traore of Burkina Faso’s military has also announced the creation of a transitional government to replace the now dissolved government and parliament, but an opposition leader has called for protesters remain steadfast.

“The state of emergency is unacceptable. We are calling on the people to show that they are against it,” Zephirin Diabre told local broadcaster Radio Omega.

The protests began two days ago after Burkina Faso’s parliament announced intentions to make changes to the constitution in order to allow President Compaore to run for a third term, and after 27 years of rule.

Several government buildings including the parliament have been damaged or burnt with one protester confirmed killed, although unconfirmed reports suggest dozens of casualties by security forces since the unrest began.