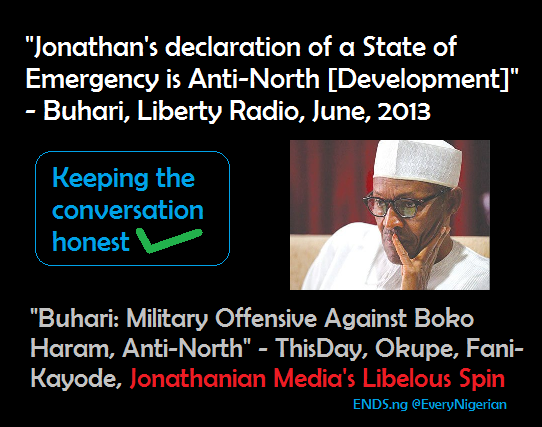 My viral article about a month ago had promised a reward of N1,000,000 for any Nigerian who could prove the allegation by Jonathan’s camp that President Muhammadu Buhari said, “A war against Boko Haram is a war against the North.”

Since then no one has been able to find he made such a statement, everyone who has responded quoted the same ThisDay libelous publication and others in Vanguard and other papers that mischievously or erroneously twisted his statements to Liberty radio in their caption but failed to show such statement in the text of the falsely and slanderously headlined articles.

With your permission, we have concluded the exercise. It is evident that what President Muhammadu Buhari said to Liberty radio that got contorted was, “A declaration of a State of Emergency would be anti-North [development].” Referring to all the economic and social consequences of such harsh measure rather than equipping the army and working with our neighbors to properly and exigently contain the threat as is being done now without State of Emergency declaration.

It is recollected that at the end of 2014 when President Jonathan begged for a renewal of the State of Emergency, Nigerians unanimously rejected it this time and the Senate rejected extending it having realized it was not offered by Jonathan and his military Chiefs in good faith. The rejection, annoying Jonathan and his army chiefs who were apparently utilizing that premise to exploit billions of dollars budgeted for the “unfunded army [Badeh, July 2015]” and suffocate, isolate and confine the north farming belt into a Boko Haram trap and death pool.

Side Note: ENDS had pushed for the first, 2013 State of Emergency in opposition to Buhari at the time who apparently read Jonathan and his Service Chiefs better.

Buhari is not perfect, but he is damn good!

The earlier publication of July 7th is below:

Offer: Reward of N1 Million If You Show Who Said “An Attack On Boko Haram Is Attack On North”

The statement above has been oft repeated with an attachment to a then senior citizen of Nigeria and the current leader of the nation. I just read it again in a casual comment by a certain “Uzochukwu Oranu“, who said “Attack on Boko Haram is attack on the north, alhamdulahi.”

Over the years one thing some of us have dedicated to is “keeping them honest.” We have called out those who have made callous and terror-sponsoring statements, like former PDP chairman, Bamanga Tukur who defended and promoted Boko Haram by saying, “Boko Haram is fighting for justice; Boko Haram is another name for justice,” in contravention of Nigeria’s anti Terror bill, and yet remained Party chair, head of Nigeria’s railway and still a free man. He was quoted clearly making this utterance as contains in the Punch.

I have also called out the former president for defending Boko Haram as “his siblings” in spite of their Church bombings at the time, and his saying as such they are “not deserving of the wrath of the Nigerian army.” He was quoted all over the press and his chosen party spokesman, Femi Fani-Kayode, now Olukayode verified he made the statement. He has also not been charged.

In the same vein, we have dedicated our time to cleaning up slander and libel against Nigerian citizens which became common place and sponsored by billion dollar “Wendell Simlin” party campaigns through the Jonathan years.

Few knew that when a libelous accusation was made against the person of our president, Muhammadu Buhari, he took Reuben Abati and the Guardian newspaper to court and in a settlement aided by the direct plea of the then president of Nigeria, Goodluck Jonathan, Reuben and The Guardian published an unreserved apology. As lies travel faster than truth and then Statesman and contender Buhari lacked (perhaps still) a proactive and reliable media team, we took it upon ourselves to publicize that and make the truth thoroughly known.

In the past we also cleaned up a statement “we will make Nigeria ungovernable,” also falsely attributed to our current President. We proved unchallenged in our releases last year that it was the person of Lawal Kaita, a PDP founding father that made the “ungovernable” statement which could never be linked to PMB.

Today we find we continue to exist in a state where treacherous and treasonous slander continues to be freely propagated in lawless Nigeria. Some innocently because the media has failed to thoroughly make the public aware of what is true and what is false, and some as a continuation of the Wendell Simlin Party billion dollar slander and smear campaign.

I recently penned a review article “Media In Nigeria And The Need For Decree 4,” that did not suggest Decree 4, but analysed media unprofessionalism and failures at all levels of the Nigerian society, private and State, and discussed why Decree 4 and similar stipulations which actually do already exist within the Nigerian constitution are recurrently necessary for nation building.

I believe citizens and the media including State media culpable in gross misinformation, slander and the publishing of false information and information that provokes sedition must be rebuked in some way.

How About A Reward instead Of Punishment

To this end, with my limited capacity as a patriotic Nigerian, to finally confirm or lay to rest a yet popular slanderous statement, I have offered this lucrative reward to anyone that can substantiate the allegations in this all too popular statement. I hope the sum offered will help this advert reach to all those who present that quote and all those who read it so that we all can benefit from the truth. Flets had asked before on Nairaland but no one was able to substantiate it.

To help all contestants, that statement can be traced to among possible other sources, this publication caption in Nduka Obaigbena’s ThisDay; an article criticizing the declaration of a state of emergency, “Buhari: Military Offensive against Boko Haram, Anti-north,” written by By John Shiklam on June 3rd, 2013. Link: [ http://www.thisdaylive.com/articles/buhari-military-offensive-against-boko-haram-anti-north/149256/ ] You might find it in other places and be able to go to the primary source. It may be of assistance to inquire where the treacherous “statement” was made from the former PDP president Goodluck Jonathan’s media spokesman, Doyin Okupe who “verified” the statement was made in this clip on Channels TV last December: [ https://www.youtube.com/watch?v=Vq0MFpRmrYU ]. Another yet free man, PDP presidential campaign spokesman Femi Olukayode, FFK may also be able to assist you explore that alleged “statement” which he has quoted in the Vanguard.

We will assist your search for the statement being uttered, in any way possible. A clearer full of Buhari’s talk on “extra-judicial killings, amnesties and injustice and terror,” with Liberty FM radio can be read here.

The “winner(s)” will be announced and all “winners” will be paid in a follow-up article.