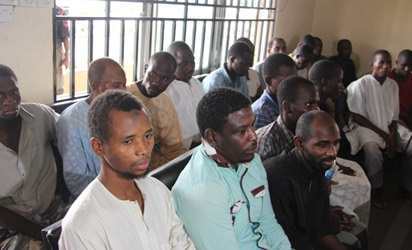 The Nigerian Government, Tuesday, told the United Nations Human Rights Council, that the Boko Haram insurgents in some parts of the country are impact of externally-induced internal security challenges.

Nigeria, also said that it will not bow to international pressure to allow same sex-marriage in the country, arguing that same sex marriage is against its cultural and traditional values.

It also justified the execution of death row inmates in the country, contending that same was in accordance with its laws.

Defending Nigeria’s human rights record at the on-going 17th session of the Universal Peer Review, UPR mechanism of the UN Human Rights Council in Geneva, Switzerland, Mr Mohammed Adoke, SAN, the country’s Minister of Justice and Attorney General of the Federation,  said “Nigeria is experiencing the impact of externally-induced internal security challenges,  manifesting in the activities of militant insurgents and organised crime groups which has led to the violation of the human rights of many Nigerians.

To address the problem, the government has adopted constitutional measures which include the “declaration of a state of emergency” in the states of Adamawa, Borno and Yobe of the Northeast Nigeria, where the insurgents have their base. As a result, a Joint Task Force and a Special Task Force have been deployed with the required legislative authorization to utilize rightsbased “Rules of Engagement” and “Operational Plans” in combating the insurgency.

“However, the Nigerian Government has kept open communication channels through the activities of a Presidential Committee on Security Challenges towards working out a peaceful resolution of the crisis. Meanwhile, Government has already proscribed Boko Haram as well as the Jamāʿatu Anṣāril Muslimīna fī Bilādis Sūdān and stipulated a 20-year jail term for anybody who aids or sponsors them in any manner whatsoever. The Government has also put in place an amnesty programme to dissuade terrorists and other extremists from violence.

“The Nigerian Government has taken other measures to improve security, including enactment of the Terrorism Prevention Act 2011 and its subsequent amendment in 2013 to broaden the scope of its application; development of a Counter Terrorism Strategy and creation of crisis management centre in the office of the National Security Adviser; coordination of enhanced capacity building for all security and intelligence outfits at both the strategic and tactical levels; the National Security Adviser coordinates efforts among the security and intelligence agencies to ensure protection of the human rights of all persons in counter terrorism operations.

Human rights standards have been incorporated in the training curricula of all operatives and coordination of a security awareness programme for ministers and other functionaries of government.”

On same sex-marriage, he said,  “Nigeria does not accept recommendation of some country on the matter, because same-sex marriage is against its national values. Recent polling data suggests that 92 percent of Nigerians support the Anti Same-Sex Marriage Bill passed by the Senate.

Same-sex marriage is not in the culture of Nigerians. Sexual and gender minorities are not visible in Nigeria and there is no officially registered association of gays and lesbians. In writing this report, a consultation and validation process was held with various stakeholders where the issue of same-sex marriage was brought up, and the general view of the participants was that same-sex marriage was not a human rights issue in Nigeria.”

On death row inmates execution, he said “the right of man to life is the most fundamental human right. Government uses the death penalty as a deterrent to protect human life. Section 33 (1) of Constitution of the Federal Republic of Nigeria 1999 guarantees the right to life. It provides ‘’ Every person has a right to life, and no one shall be deprived intentionally of his life, save in execution of the sentence of a court in respect of a criminal offence of which he has been found guilty in Nigeria.’’

“The Penal code and Criminal code prescribe death sentence for anybody who commits culpable homicide punishable with death and murder respectively. Death penalty is a valid part of Nigerian law.

In Nigeria today, offences that are punishable by death include murder, treason, directing or presiding at an unlawful trial by ordeal from which death results, and armed robbery.”