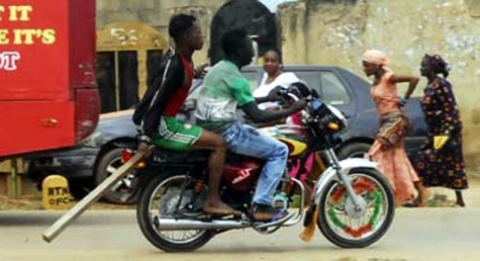 NewsRescue– Riots broke out at St. Mary’s Catholic Church in Nyanya, Karu area Abuja, FCT after soldiers on guard at the Church humiliated a fasting Muslim commercial driver, commanding him to frog-jump in front of the Church and then to drink filthy water from the gutter because he was fasting.

According to reports gathered, the Hausa Muslim commercial driver, dropped off a Christian Church goer at the Church. He was said to have parked unknowingly beyond a designated parking spot, this provoked the soldiers to pounce on him and as is common in Nigeria, where law enforcement officers are known for their psychopathic shows of power, he was pulled from his ride and degraded.

According to SaharaReporters, the man may have died from the torture he received.

Mobs, including fellow commercial bike riders quickly gathered and broke out in riots in the vicinity of the Church, damaging cars. The mobs were fended off by the soldiers on guard who fired live rounds to disperse the angry crowds and allow Church members go home.

According to Babajaje Abdullahi, a local of Karu area, of FCT, where the incident occurred, the area is Muslim predominant and there has never been any bombing or attack on Churches there, so he just could not understand the extreme application of force by the soldiers on guard against the innocent commercial driver who was reportedly killed from police brutality and torture.

Extreme discipline is advised, the case is a case of army brutality and not a case of Muslim-Christian animosity. All efforts should be made to bring the security officers implicated to full justice, if such exists and is possible in Nigeria.

Beware of some media networks, like Olufamous, Osundefender etc spreading false and malicious versions of events for cheap publicity. There was no Boko or what rubbish they published. Always Rescue your news!