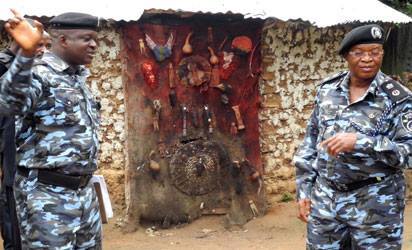 THE absurb appears to be happenig these days in Nigeria, as the inclement economic situation in the country continues to bite harder.

In Cross River State, a hitherto peaceful lesser oil-bearing state in Southern Nigeria, is fast becoming a theatre of the absurd. A suspected ritual killer, has allegedly abducted a three-year-old girl and forced a stick into her vagina.

The suspect, abducted the girl on February 28, 2016 in Ikang, headquarters of Bakassi Local Government Area of the state, while she was playing with her peers, and hurriedly took her to a nearby bush where it was discovered that he had inflicted injuries on the victim.

Sources told our correspondent in the area that the girl was rescued after her peers immediately raised the alarm and a search party combed the nearby bush where the suspected ritual killer was apprehended when he was already wreaking havoc on the child’s body.

The suspect is currently cooling his feet with the police at Ikang Police Division, while the girl (names withheld) had undergone several surgeries at the University of Calabar Teaching Hospital (UCTH).

An insider at UCTH, Uche Okoro, said the little child was brought to the hospital in a critical condition, pointing out that he picked interest in the matter shortly after the family of the suspected ritual killer came to the hospital and offered to pay N10,000 as part of the medical expenses.

According to him, ”the incident happened at Ikang in Bakassi LGA. The three-year-old girl was brought to the UCTH in a critical condition. She was said to have been abducted by a suspected ritual killer and taken to the bush.
“Another girl that was with her when the incident happened immediately raised the alarm and a search party went to look for the little girl. She was found in the bush and the suspect was apprehended.

”Another one-year-old baby was found dead not too far from where the girl was rescued. The girl was already bleeding profusely because she had machete cut and a wood was forced into her vagina. It was learnt that the suspect was handed over to the police while the child was brought to us for treatment.

”At the moment, the hospital has carried out series of surgeries on her and she is in a stable condition. But the concern here is that a family showed up and offered to pay N10, 000 to offset part of the medical bill. We found out that it was the family of the suspect. My worry here is that how is this possible? Or are they acting on orders of the police? We just hope that the police have not compromised.”

Spokesman of the Police in the state, Mr. John Eluu, when contacted claimed that he had yet to get briefing on the matter.