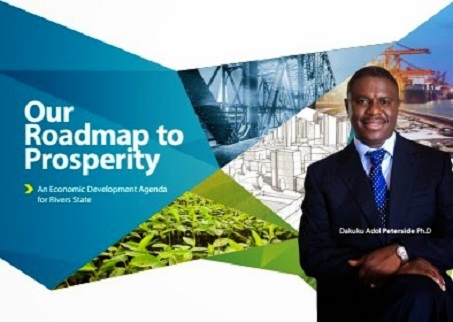 The ruling party in Rivers State, the All Progressives Congress (APC), has berated the Peoples Democratic Party (PDP) leadership in the state for demonising the APC governorship candidate, Dr. Dakuku Adol Peterside. Rivers APC in a statement issued Monday in Port Harcourt took serious exception to the claim by PDP that Dr. Peterside is copying the ideas and programmes of PDP governorship candidate, Chief Nyesome Wike.

“This allegation as contained n a press statement signed by Mr. Jerry Needam on behalf of his Rivers State Chairman of PDP, Mr. Felix Obuah, is vexatious, ridiculous and without foundation. It is stands logic on its head because it is coming several weeks after we had cause to alert the public about attempts by Wike, who has no programme for the development of Rivers State but was imposed on Rivers PDP by his political godmother, First Lady Patience Jonathan, to copy the programmes of Dr. Peterside as contained in his well-publicised “Road Map to Prosperity”, a Four-Point Agenda aimed at taking Rivers State to the next level via Public Sector Accountability and Security of Lives and Properties; Employment Generation and Wealth Creation; Social and Human Capital Development and Empowerment; as well as Institutional and Physical infrastructure Development and Food Security,” Rivers APC Chairman, Dr. Davies Ibiamu Ikanya, said.

Ikanya in a statement issued in Port Harcourt pointed out that as at the time Dr. Dakuku Peterside presented his agenda for the emancipation of Rivers State shortly after his emergence as the flagbearer of APC on 28th November, 2014, Chief Nyesome Wike was still yet to be imposed by Dame Patience Jonathan on the party to the detriment of the candidates more qualified to fly the gubernatorial flag of the party in Rivers.

“For Needam and his master Obuah to therefore turn around after over two months to accuse Dr. Peterside of copying or attempting to copy Wike’s non-existent development agenda clearly betrays the educational backwardness of Mr. Jerry Needam, who may not understand what the word copycat means after spending ten years without graduation from Rivers State University of Science and Technology, and Mr. Felix Obuah, who was not privileged to see the four walls of any sound educational institution. To describe Dakuku Peterside, a Doctorate Degree holder and Chairman of Upstream of the Federal House of Representatives as a copycat who lacks originality suggest that Jerry Needam, a pathological liar and a mental case who has visited a psychiatric hospital at Enugu on several occasions, is yet to be fully cured of his mental challenges,” Ikanya said.

Responding to the specific allegation that Peterside started going to churches in imitation of Wike, Dr. Ikanya said: “Mr. Needam forgot that Dr. Dakuku Peterside in a globally broadcast Thanksgiving Service handled by about 2,000 men of God handed over his mandate to God in December 2014 before Wike started his so called church campaigns. Needam also forgot that Dr, Peterside being a born again Christian needs not advertise his church programmes unlike Chief Wike, who because of his anti-christ disposition advertises his church events to deceive Christians that he has become a Christian, forgetting that Rivers people are too enlightened to be easily deceived.”

The Rivers APC Chairman described Peterside as a man who has earned a reputation as a charismatic and disciplined leader; creative and hardworking, a broad-minded fellow with strategic insights. According to him, “Peterside is widely respected as one of the most result-oriented, meticulous, consistent, trustworthy and God-fearing political leaders, in all public offices he has held he has brought innovation to bear and made remarkable impact that has endeared him to his fellow compatriots. He is a role model and mentor to several young persons, who look up to him for inspiration. He has at various times turned down at least fourteen chieftaincy titles, several honourary doctorate degrees and awards rather believing in the people as a reason for service. We are proud to recommend him to the great people of Rivers State as their next governor after the departure of the goal-oriented Rt. Hon. Chibuike Amaechi in 2015.”
“In the House he serves as chairman of the strategic Petroleum Resources (Downstream) Committee that oversees the management of the key driver of Nigeria’s economy (Petroleum Industry). Dakuku Peterside also serves in the most important House committees of Anti-corruption, National Ethics and Values; Drugs, Narcotics and Financial Crimes; Co-operation and Integration in Africa, Electoral Matters; Industry; Communications and Works. He is a well known champion of reform and strengthening of institutions as key to unlocking development potentials.

“Besides, this great son of Rivers State is an international resource person on oil and gas matters and a leading leadership/management scholar and speaker in leading conferences around the world. He is a respected authority on corporate political strategy and Business-Govt interaction in Nigeria. We are proud to recommend him to the great people of Rivers State as their next governor after the departure of the goal-oriented Rt. Hon. Chibuike Amaechi in 2015.”

Can such a character like Dr Peterside with the above qualifications be a copycat of course no maybe to a debased mind like Mr Needam and his paymasters, Dr Peterside a Doctorate Degree Holder and an accomplished administrator of note is? What a shame!
Both our press statement of 20th January, 2015 accusing PDP and Chief Wike of the plot to clone Dr Peterside’s agenda for the revolution of Rivers State and a copy of the well advertised Road Map to Prosperity is hereby attached in case anybody is in doubt. (http://www.thenigerianvoice.com/news/167383/1/rivers-apc-uncovers-plot-by-pdp-wike-to-clone-daku.html
http://www.olufamous.com/2015/01/rivers-apc-uncovers-plot-by-pdp-wike-to.html
http://citypeoplenews.com/rivers-apc-uncovers-plot-by-pdp-wike-to-clone-petersides-four-point-agenda/)
Long Live APC!

03-03-15
will serve as an instrument to be used to revolutionise Rivers State under the envisaged Dakuku Peterside administration.