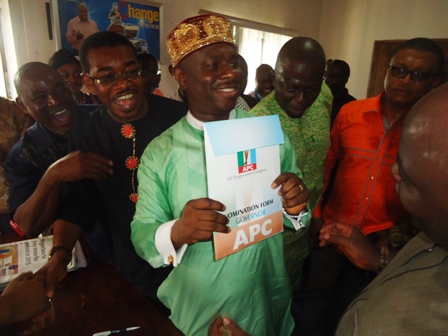 The All Progressives Congress (APC) in Rivers State berated the State Chapter of the Peoples Democratic Party (PDP) for suggesting that the appointment of the immediate past Governor of the State, Chibuike Rotimi Amaechi, as the Federal Minister of Transportation is a waste and will not make any meaningful impact to the people of Rivers State.

Rivers APC said in a statement signed by the State Chairman, Dr. Davies Ibiamu Ikanya, and issued Sunday in Port Harcourt: “We unreservedly condemn this unwarranted attack on the Honourable Minister of Transportation, Rt. Hon. Chibuike Amaechi, by Rivers PDP and take strong exception to the party’s description of Amaechi as a misfit. Though Rivers PDP is well known for the use of gutter and uncouth language, describing a Minister of the Federal Republic of the stature of Amaechi as a misfit evidently crosses the line and speaks volumes about the character of Rivers State PDP Leader, Chief Nyesome Wike, and his co-travellers in the doomed party.”

Continuing, Rivers APC said: “We view this statement not only to be unfortunate but also a great disservice to Rivers State and Nigerians as a whole. Instead of this drowning party with her members mourning and apologising to Rivers people for wasting billions of naira on a failed plot to stop Amaechi’s ministerial appointment, the party is unrepentantly issuing worthless and absurd statements that only serve to confirm that Wike’s PDP is the number one enemy of Rivers State and her people.”

Rivers APC noted that, contrary to the claim of the State PDP, Nigerians are aware that Amaechi is an achiever and believe in his ability to make a positive difference in the transport sector, including ensuring the completion of work on the Port Harcourt International Airport and other projects in the State abandoned by the sacked PDP federal administration of Goodluck Jonathan through the influence of Wike.

The statement advised Wike and Rivers PDP to cover their faces in shame as their six months in power through a stolen mandate has brought nothing but embarrassment,shame and misery to Rivers State and her people. Enumerating the sins of the Wike administration, Rivers APC said: “Apart from the fact that Wike as erstwhile State Minister of Education collaborated with Dr Goodluck Jonathan the erstwhile President of Nigeria to cede our oil wells to Bayelsa, Abia and Akwa ibom States thereby denying Rivers State and her people revenues due to the State. It is also an established fact that Wike spearheaded and collaborated with the PDP Government to ensure that throughout the ill-fated six years of Dr Jonathan’s administration no Federal project was sited in Rivers State. This evil clique ensured that the Rivers State portion of Port Harcourt – Enugu Express road remains a death trap so that the blood of Rivers State people are wasted on daily basis during this evil regime.

Today, over N45 billion collected from the Federal Government (May to October 2015) has been wasted in bribing the judiciary and promoting impunity in Nigeria. To demonstrate Wike’s disdain for Rivers State and her people, the world-class international secondary school located in Eleme built by the Amaechi’s administration has been closed down including the Buguma International Fish Farm employing over 2,000 Rivers people has been closed down; the world famous Songhai Export Farm employing about 5,000 direct and indirect labour has been closed down; the Banana Farm in Ogoni is being readied for outright sale, while the kindergarten schools built in each of the 23 LGAs are being shut down.”

The statement added that over 1,000 youths and Road Traffic Marshals (TIMARIV) have been sacked from their jobs; about 1,000 demonstration school teachers and lecturers at Saro-Wiwa Polytechnic (formerly RIVPOLY) sacked; all modern primary schools built by ex-Governor Amaechi left to become grazing fields. It noted that medical doctors are now leaving Rivers State in droves for better places; N3 billion collected from oil companies in Eleme for road repair has been squandered and the road further made worse; hundreds of overseas scholarship students deported back (mostly those from London); modern transport router – monorail project abandoned; 42 roads and 7 bridges constructed in the air; militants now occupy LGA Councils pending court ruling on elected chairmen and councilors; graduates must join or belong to cult groups before they can access any empowerment scheme; while the Special Adviser on Media, Opunabo Christian Inko-Taria; was sacked for daring to allude partly to this list to the hearing of the Governor.

Rivers APC concluded by reiterating that PDP’s days in Rivers State are numbered, vowing: “We will not rest on our oars until Rivers PDP leaders explain why 100 members of our party were killed just because of election.”