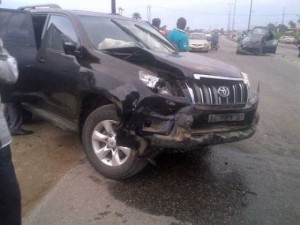 The Rivers State Governor Hon. Rotimi Amaechi, miraculously escaped unhurt as a vehicle rammed into his convoy along Igwuruta road on the Governor’s way to the Port Harcourt International Airport.

According to eyewitness account, the accident was caused by the intrusion of a Toyota Avensis with registration number AAA 767 AQ that rammed into the Governor’s convoy from the opposite side of the dual carriageway, just after the C4I Security Post along the Port Harcourt International Airport Road. Fortunately no life was lost and the driver of the vehicle was apprehended and handed over to the police.

Rivers State has for the last 3 months have been in the news as political bigwigs in the state outwit themselves in a bid to wrest political power and control the political landscape of the oil rich state. 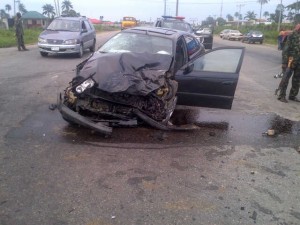