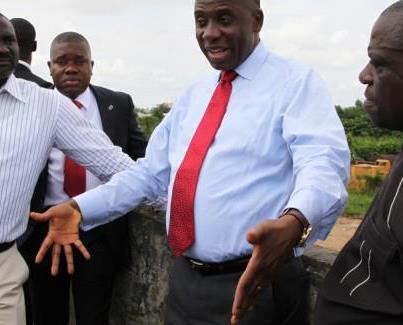 The Rivers State Government has inaugurated a committee charged with organising the mother of all rallies to mark the seventh anniversary of the October 25, 2007 historic Supreme Court verdict that enthroned Rt. Hon. Chibuike Rotimi Amaechi as the authentic, duly elected Governor of Rivers State instead of Sir Celestine Omehia, the imposed PDP gubernatorial candidate during the February 2007 polls. The mega rally is scheduled to hold October 25, 2014, at the new 65,000-seating capacity stadium in Port Harcourt constructed by the Amaechi Administration to boost sports in Nigeria. It will be used by Governor Amaechi to give an account of his stewardship to the people of Rivers State, who renewed his mandate during the 2011 elections.

The 2014 Solidarity Rally Convention Initiative Organising Committee inaugurated on 14th October, 2014 to mobilise Rivers people as well as well wishers of the State for the big event, has the State Deputy Governor, Engr. Tele Ikuru, as Chairman of the Central Committee, with the State Commissioner for Commerce and Industry, Hon. Barr. Chuma Chinye, as Secretary. Inaugurated on behalf of Governor Amaechi by Deputy Governor Ikuru at the Banquet Hall of the Rivers State Government House, the Committee has the following sub-committees: Mobilisation with Chief Tony Okocha, the Chief of Staff to Governor Amaechi, as Chairman; Publicity with Commissioner of Information, Mrs. Ibim Semenitari, as Chairman; Health with Dr. Sampson Parker, the Hon. Commissioner of Health, as Chairman; Venue with Hon. Igo Aguma as Chairman; Security with Chief Ade Adeogun as Chairman; Traffic with Hon Confidence Eke as Chairman; Protocol with Hon Henry Halliday the Government House Chief of Protocol as Chairman; and Entertainment with Hon. Aye Atamah Pepple member respresenting Bonny Constituency in the Rivers State House of Asembly as Chairman.

Gov. Amaechi charged members of the Committee to work assiduously to ensure that only true sons, daughters and friends of Rivers State are mobilised and not those who share out Rivers land and oil wells to other states. He, however, explained that the rally is being organised for the progress and development of the State and not for political campaign or anything of such.

Responding on behalf of the Committee, Chief Tony Okocha noted that the members were carefully selected and assured that they will surely deliver.

In his remarks, the Rivers State Chairman of the ruling All Progressives Congress (APC), Dr. Davies Ibiamu Ikanya, expressed delight and commended Governor Amaechi for his feats, transparent leadership and commitment towards the emancipation of Rivers State and her people. “We are proud for having Gov. Amaechi as our leader,” he stated.

The administration of Governor Amaechi has embarked upon many projects unprecedented in any other State in Nigeria that includes, setting up of the Songhai Farms and the N20B Agric Scheme that revolutionised agriculture in the State, starting off of the billion Greater Port Harcourt city to decongest the present Port Harcourt City and construction of one of the best stadia that hosted the last Sports Festival in the new city. Building and equipping 180 health centres across the state, constructing many roads and schools, embarking on a monorail first of its kind in Nigeria which the Governor has promised the completion of the first two phases by 2014. Upon completion, the monorail would transport 40,000 passengers daily. Offered scholarships to over 2,000 students in Nigerian Higher Institutions and spending of about N5bn for her students in foreign Intuitions. Building a world Class University which when completed will turn out well equipped graduates that will hold their own in any field and compete with the best in the world. Offers free education and free health delivery to its people but stands apart as the only State offering free education, free sandals, free books and free uniform in Nigeria. About 200 primaries schools have been set up in 200 communities, a feat that no other state is yet to accomplish.

The Rivers State Government has invested over N100b per year from 2008 till 2011 in provision of roads, bridges and Social amenities. In this regard, the Government has engaged in the construction of 800km roads with 250 already completed. 10 major bridges under construction with 3 already completed. 20 minor bridges under construction with four completed, 2flyover/interchange under construction. 6 Land reclamation/shore protection projects at Andoni, Opobo, Buguma, Abalama, Olombie/Owukiri Island, Oba Ama, Okirika with 1,1400,000km 2 completed. 2 major markets and a shopping mall under construction (phase 1 of mile 1 market housing 960 shops and two banking halls completed). Apart from all these the Rivers State Government has built three power stations built at Omoku (150 Mega watts), Trans-Amadi (130 Mega watts) and Eleme (75 mega watts). By June, 2011, capacity will be increased to 500 Mega Watts under the $195 million dollars 180 MW gas turbine awarded to Saipem. Seven Transmissions stations (132/33 kilo volts) and 7 Distribution injection sub-stations 33/11 Kilo Volts built. The security and freedom the people of Rivers State are now enjoying can only be appreciated if the scenario and state of Rivers State before Gov Amaechi assumed office can still be remembered by our people.