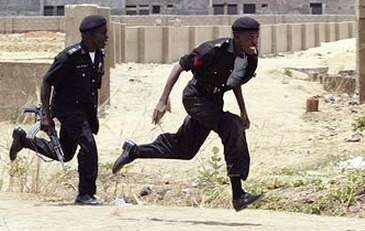 THE power game in Rivers State has started to be hot, with armed political foot soldiers targeting their prey in the boiling state.

Already, an Assistant Superintendent of Police (ASP), and three other Police officers have lost their lives in a gun battle with suspected assassinson Tuesday.

It all started in the early hours of Tuesday, when the Special Adviser, Media and Publicity to the state Chairman of the Peoples Democratic Party (PDP), Jerry Needam, put a distress call to the Police.

Needam’s Port Harcourt residence was under siege unidentified gunmen suspected to be acting for political reasons. The PDP man however, escaped an alleged kidnap and assassination attempt.

The incident, according to the target, is the third on his life. The latest occurred at his residence in Port Harcourt, the state capital, during which armed men engaged the Police in a fierce gun battle, leaving the compound, rooms and vehicles riddled with bullets.

Needam said the gunmen stormed his residence in the wee hours of the morning and shot sporadically to gain entrance into the compound.

According to him, ”during the incident which lasted for over two hours, i put a distress call to the Police who promptly arrived my residence and engaged the gunmen in a fierce battle.

”At the end of the bloodletting battle, three of the gallant Police officers, including an Assistant Superintendent of Police (ASP) lost their lives while two other Police officers and my security guard, who suffered serious gun shots are now receiving treatment at a private hospital in Port Harcourt”.

He said the failed kidnap and assassination attempt on his life and family, ”are the handiwork of my political opponents who desperately want me silenced following my strong political views”.

Meanwhile, in an interaction with the state Commissioner of Police, Musa Kimo, on the incident, the PDP media chief expressed confidence in the ability of the Police to investigate the matter and fish out those behind the assassination attempt.

He has sympathised with the Police command and the families of the deceased policemen, praying that God to give them the fortitude to bear the loss of their beloved bread winners.