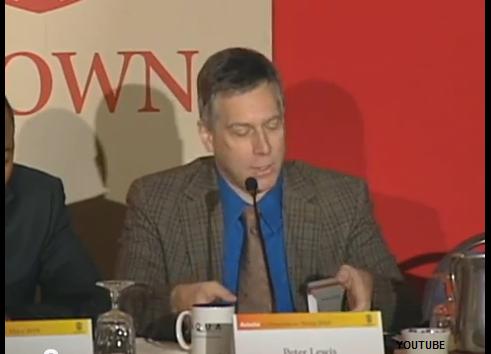 NewsRescue- In view are three information pieces. Aljazeera’s report on the west robbing Africa, the Brown University Achebe African Colloquium, a meeting in the US with, EFCC boss Nuhu Ribadu, SaharaReporters and others in participation and an interview with John Campbell, former U.S. Ambassador to Nigeria, in discussion of his book, “Nigeria: Dancing on the Brink.”

The highlights are simply stunning:

Brown University Achebe African Colloquium focused attention on three important African nations: Rwanda, Congo, and Nigeria, and the crucial issues that are impacting these nations, the continent and the world.

Interview with John Campbell, former U.S. Ambassador to Nigeria, in discussion of his book, “Nigeria: Dancing on the Brink.”

How to Rob Africa – Aljazeera

Why does the Western world feed Africa with one hand while taking from it with the other?

The world’s wealthy countries often criticise African nations for corruption – especially that perpetrated by those among the continent’s government and business leaders who abuse their positions by looting tens of billions of dollars in national assets or the profits from state-owned enterprises that could otherwise be used to relieve the plight of some of the world’s poorest peoples.

Yet the West is culpable too in that it often looks the other way when that same dirty money is channeled into bank accounts in Europe and the US.

International money laundering regulations are supposed to stop the proceeds of corruption being moved around the world in this way, but it seems the developed world’s financial system is far more tempted by the prospect of large cash injections than it should be.

Indeed the West even provides the getaway vehicles for this theft, in the shape of anonymous off-shore companies and investment entities, whose disguised ownership makes it too easy for the corrupt and dishonest to squirrel away stolen funds in bank accounts overseas.

This makes them nigh on impossible for investigators to trace, let alone recover.

It is something that has long bothered Zimbabwean journalist Stanley Kwenda – who cites the troubling case of the Marange diamond fields in the east of his country.

A few years ago rich deposits were discovered there which held out the promise of billions of dollars of revenue that could have filled the public purse and from there have been spent on much needed improvements to roads, schools and hospitals.

The surrounding region is one of the most impoverished in the country, desperate for the development that the profits from mining could bring. But as Kwenda found out from local community leader Malvern Mudiwa, this much anticipated bounty never appeared.

What is happening is actually something of a mystery because though the mines are clearly in operation and producing billions of dollars worth of gems every year, little if any of it has ever been put into Zimbabwe’s state coffers.

Local and international non-governmental organisations say they believe this is because the money is actually being used to maintain President Robert Mugabe’s ruling Zimbabwe African National Union – Patriotic Front (ZANU-PF) in power.

True or not, it is clear that the country’s finance minister, Tendai Biti, has seen none of it. A representative of the opposition Movement for Democratic Change, which sits in uneasy coalition with ZANU-PF, he says he has no idea where it is going.

Sadly, as Stanley Kwenda has realised, it is typical of a problem found all over Africa.

The continent is rich is natural resources that are being exploited for big profits, but the money is rarely used for the benefit of the people. Instead it goes to line the pockets of corrupt officials who then often smuggle it out to be deposited in secret offshore bank accounts in the developed world.

So who facilitates these transactions? And how and why does the developed world make it so easy to launder this dirty cash?

In this revealing investigation for People & Power, Kwenda and the Ghanaian undercover journalist Anas Aremeyaw Anas, set off to find out. Posing as a corrupt Zimbabwean official and his lawyer, their probe takes them deep into the murky world of ‘corporate service providers’ – experts in the formation of company structures that allow the corrupt to circumvent lax international money laundering rules.

It just so happens that the pair’s enquiries take place in the Seychelles but, as they discover to their horror, they could just as easily be in any one of a number of offshore locations (or even in the major cities of Europe and the US) where anonymous companies can be set up for the express purpose of secretly moving money and keeping its origins hidden from prying eyes.

Despite the abundance of resources on the continent, success has been very elusive for many Africans. The narrative is one many are too familiar with: corrupt leaders force themselves into political office, then they work to undermine the progress of their people.

That is what leaves many African countries poor – corrupt leadership. It hinders progress.

What has kept this diagnosis of Africa from a cure is not immediately clear. Foreign aid, debt relief and the many notes of economic salvation have been applied. Not much has changed. Dreams fail for many young Africans. The trouble with Africa still looms large.

The need for Africa’s troubled state has inspired my career as an undercover investigative journalist.

Over the past decade, I have tried to focus on human rights violations, corruption and the many ills that plague society. Through many anti-human trafficking and anti-corruption stories, I have come close to answers.

Exposing bribe-taking police officers, public officials and other corrupt individuals has brought some change. This has been on the ground, yet many of the problems still persist.

This film, How to Rob Africa, takes this further by focusing on what many leaders in high office do that leaves the continent in a bad shape.

Decades into political independence, many African governments remain reliant on foreign aid, yet often as soon as this aid arrives it is spirited away into the personal accounts of the leaders who are supposed to be looking after the interests of their people – and ironically many of those accounts are back in the West.

It is no surprise that many Africans are left asking the developed world: “Why do you frown publicly about corruption, yet turn a blind eye to its fruits?”

What we sought to do in our investigation was to point in the direction of money laundering as a substantial contributor to Africa’s corruption – or at least one of the most important enabling factors – and the role played by corporate service providers in setting up structures to allow it to take place.

In the Seychelles, we found how easy it is to rob Africa. We learned about the clever but brazen tricks and scams that can be used (for a fee) to disguise the origins of money and the identities of those who are moving it around.

We do not say that all of Africa’s woes are the fault of others outside the continent. Nor do we assume that criminality is the only reason why Africa, despite its many natural riches, has been kept in poverty.

But we did come away wondering why the outside world feeds Africa with one hand and takes from it with another. Why cannot the resources for aid be directed into fighting this obvious problem? Is it not about time that something was done to stop those stealing our wealth, and those helping them steal it, from evading responsibility prosecution for their crimes? Read on Aljazeera…