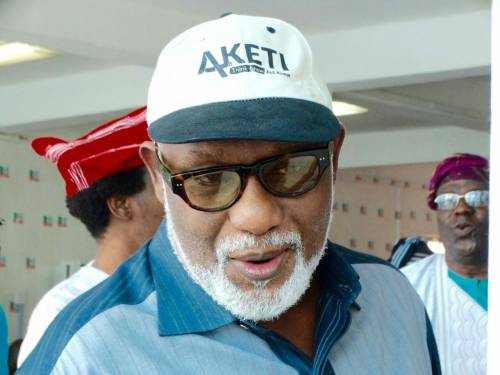 Rotimi Akeredolu has emerged the governorship candidate of the opposition All Progressives Congress (APC) in Ondo State following today’s primary election held amidst tight security in the capital of Akure.

Governor Mohammed Badaru Abubakar of Jigawa State, who is also the chairman primary election committee of the party that monitored the exercise, announced Mr. Akeredolu as the winner of the poll at the international event center moments ago.

He described the conduct of the APC primary election producing a candidate for the opposition party in the state as transparent and credible.

Mr. Abubakar, however, asked the unsuccessful aspirants in the election to pacify their supporters to join hands with Mr. Akeredolu in order to win the November 26th governorship election in the state.

He disclosed that the party was prepared to defeat the ruling peoples Democratic Party (PDP) in the November 26th governorship election in the Ondo State.

Also, the combined teams of the security task force which comprises the Army, Police, NSCDC, and DSS monitored the primary election as it went into late Saturday evening.

Twenty-four aspirants jostled for the governorship ticket of the All Progressives Congress (APC) at the primary election held on Saturday.