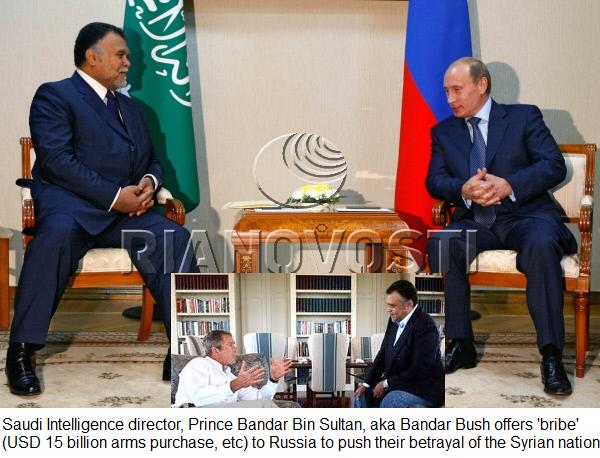 Russia has reportedly rebuffed a lucrative offer by Saudi Arabia to abandon its support for the Syrian government of President Bashar al-Assad in exchange for a package of incentives.

On Thursday, AFP quoted diplomatic sources as saying that Moscow had rejected the offer by the Saudi regime to change its stance on Syria in return for a huge arms deal and a promise to increase Moscow’s influence in the Arab countries.

Bandar bin Sultan on behalf of Saudi, offered to buy up to USD 15 billion of Russian weapons in addition to ensuring that Persian Gulf gas would not challenge Russia’s gas sales to Europe, according to Syrian opposition sources close to Saudi Arabia.

In return, Riyadh requested for Moscow to lessen its support for the Syrian government and no longer block any United Nations Security Council (UNSC) resolutions on Syria.

A former Saudi ambassador to US, Bandar is currently director general of Saudi Intelligence Agency. He is known to have had close ties with former US President George Bush, and was an advocate of the US-led invasion of Iraq in 2003.

Some observers believe that Saudi Arabia’s ally, the US, has indeed tasked Bandar bin Sultan with causing unrest in many regional countries including Syria.

Saudi Arabia along with other US allies in the region has been a key supporter of the militants fighting the Assad government in Syria.

Meanwhile, some reports suggest that Saudi Arabia is planning to get involved in Yemen militarily for the second time over the past four years.

Back in 2009, Saudi entered a direct war with Houthi fighters in northern Yemen.

Saudi Arabia also sent troops to neighboring Bahrain in 2011 to crush a popular uprising there.

Saudi Arabia is itself grappling with anti-monarch protests. Dozens of anti-government protesters have been killed in the regime crackdown in the restive Eastern Province.

NewsRescue- 100,000 dead is clearly not enough for the ruling Saudi royal family to rethink their mission against Syria. The royals have now offered Russia economic incentives, including a major arms deal and gas guarantees for Moscow to scale back its support for Syrian President Bashar al-Assad.

We recently published NATO data that showed 70% of Syrians support al-Assad while only 10% support the criminal terrorists who have destroyed the country in a 2 year battle. See: NewsRescue-NATO Data: 70% Syrians Support Assad, Only 10% Support Foreign Backed Rebel Terrorists. The rebels have enjoyed support from the Saudi royals, the Qatari monarchical regime, known for its tolerance and assistance of al Qaeda in the Middle east and even in Africa up to Nigeria.

Now as Syrian government massacres the rebels and terrorists, the Sauds are getting desperate and doing what they do best–throwing away their people’s capital in offers of bribe. It is recalled that when American Boeing faced bankruptcy, the Saudi royals purchased 200 airplanes and parked them simply to keep the company afloat. That, surprisingly is Saudi official foreign policy.

It can also be recollected that most 911 bombers were from Saudi Arabia and Saudi government was fingered in the attack (NewsRescue–Saudi Royals Funded 9/11: Lawyers- NY Times report), though according to the New York Times report, the Saudi royals were saved from being dragged to court by the 911 victims’ families, under a ludicrous ‘sovereign immunity’ protection accorded by the US government.