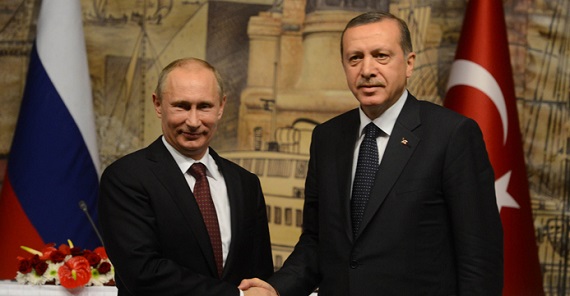 22 June, 2012. An F4 jet from the Malatya air base was shot down by Syria without warning, even though it was alone, unarmed and had its recognition systems on. In the wake of that incident in which two Turkish pilots died, the Turkish Armed Forces changed their rules of engagement vis-à-vis Syria. Under the new rules, any military vehicle approaching the Turkish border from Syria would be treated as a military target.1

The new rules were immediately put into operation. Immediate retaliation followed an incident on 3 October, 2012, when an artillery shell fell onto Turkish territory and killed five citizens. Jets approaching the border were forced back with appropriate warnings. Four of those jets that were warned off were Russian.

There has been a considerable increase in such violations during aerial attacks on Turkmen regions of Syria in recent days. These have not been made public directly, but they have been raised at high-level meetings with Russian military officials.2 Russian Ambassador to Turkey Andrei Karlov was summoned to the Foreign Ministry following another violation of Turkish air space by Russian planes on 3-4 October, and he was duly reminded of the rules of engagement.

During the incident that occurred on Tuesday, November 24, Turkish officials stated that warnings began being issued from 15 miles, that these warnings had been repeated every 2 minutes, but that the jet had ignored them. NATO, convened at Turkey’s request on that same day, issued a statement saying, “The information we have from other Allies is consistent with what we have got from Turkey.’3 An F15 jet sent by the U.S. to protect Turkish air space last week was also reported to have witnessed the incident. The U.S. put the violation in question and the warnings issued by Turkey to the U.N. in an official letter.4

By referring to ‘a plan of unknown nationality’ in its initial statement, the Turkish General Staff made it clear that Russia was not being targeted. The Turkish president also issued a statement saying, “We regret having witnessed this, but sad to say we are experiencing the pain of it having happened.”

Although some analysts maintain that Turkey acted as it did to express its unease at the aerial bombardment by Russia of Turkmens in Syria, there is no justification to that idea. It is of course alarming to Turkey that Russian planes are targeting Turkmen areas. Some of the areas targeted are civilian districts with no radical groups. Indeed, in the wake of that Turkey again encountered a large flow of refugees. However, diplomatic initiatives were taken, Turkey communicated its concerns to Russia and, on November 21, former Foreign Minister Feridun Sinirlioğlu called FM Lavrov together with U.S. Secretary of State Kerry to draw attention to border violations and the attacks on the Turkmens. Prime Minister raised the issue with the U.N. Security Council and demanded that the requisite measures be taken.5

Turkey would never shoot down a plane belonging to a friend, Russia, on such grounds. Above all else, the risks are too great.

The incident in question is therefore, not retaliation, but the consequence of the rules of engagement.

It needs to be borne in mind that Turkey is surrounded by Ukraine to the north, the scene of continuing clashes, and Syria, which is one huge ball of fire, and Iraq, with which tensions have never decreased, to the south. In other words, world states have become involved in the war right next to it, and the Turkish border is therefore frequently in the firing line. The border region is not only home to civilian settlements, but also to places where refugees are housed. Turkey’s longstanding demand for a safe zone is constantly rejected by the U.S., meaning that the line is exposed to attacks. Turkey’s sensitivity over its own border is definitely perfectly understandable.

However, it is impossible for us to approve a measure such as engagement that is likely to end in death and that endangers both the pilots in the air and people on land. Border security is of course important, but different diplomatic means should be used to that end, and different solutions should be considered. A move that may end in death is not the only option, and a different strategy needs to be adopted.

Moving on to the steps to be taken next:

Russian leader Putin has a strong and sensible nature. Turkey has always trusted Putin’s leadership and friendship. The Turkish people expect the Russian leader to behave with the same good sense on this occasion. We must not forget that although Russia and Turkey hold diametrically opposed positions on matters such as the Ukraine Crisis, the Crimean problem and Syria, they have never impaired the neighborly and, even more importantly, the friendly relations between them. The Russian and Turkish nations are a single entity. Efforts to incite strife between them and warnings along the lines of, ‘Turkey is dangerous, so do not go there,’ will therefore founder the basis of friendship between the two peoples. Putin’s harsh words in the wake of the incident stunned not only the Turks, but also journalists from Moscow. The moderation they expected was not there.6 The presence of Turkey in the Middle East has always acted as a guarantee for them. They are unwilling to lose that.

Turkey and Russia are unwilling to lose one another’s friendship. Therefore, in these warm days, angry talk must be abandoned, emotional responses must be avoided, and it must be remembered that every angry move may have terrible consequences that cannot be rectified. Nothing that might end in regret, damage our existing friendship or even turn friendship into enmity must be spoken. Rational leaders must exhibit great sensitivity on this issue, and must focus on issuing moderate messages and diplomatic initiatives. Particularly in the first weeks after this incident.

As a person of ideas who has long opposed all the plots intended to isolate Russia from the rest of the world, I have a strong faith that the Russian leader will consider the foundation of peace and ensure that love and brotherhood are kept alive. Russian-Turkish friendship is very important for us, and we will continue to strive to make it grow even after this. However, leaders acting in the light of good conscience and common sense must adopt an approach that values love and friendship by having no truck with the covert plans for way of deep state apparatuses. The world needs such initiatives, and these days are a time for self-sacrifice.