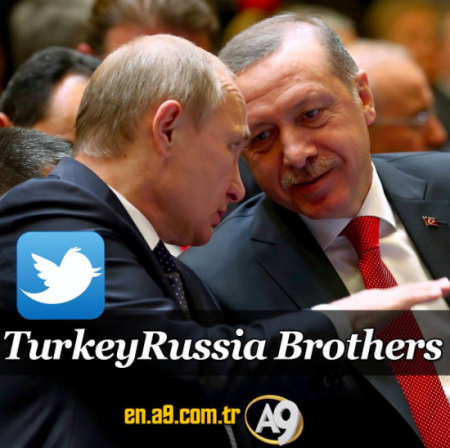 As is known, on 3-4 October, Russian warplanes violated the rules of engagement on Turkey’s border with Syria, despite being given numerous warnings. Nonetheless, Turkey did not use the right in order to actively intervene given its rights under international law. Rather, Turkey accepted the explanations made by Russian officials stating that ‘the incident was due to a technical error’ and resolved the tension through a peaceable and conciliatory approach.

In addition to this, Mr. Andrey Karlov, Russian Ambassador to Turkey in Ankara was invited to the Ministry of Foreign Affairs for a briefing on rules of engagement. In order to prevent the recurrence of a similar tension and to establish mutual concordance in regard to the operations in the region, representatives of the two countries held negotiations. Eventually, the Turkish and Russian officials stated that both sides are ready for cooperation on these matters.

Despite all these, on November 24th, 2015, a Russian warplane again violated Turkish air space on the Syrian border. Upon this, Turkish F16 jets on air patrol had to intervene within the framework of the rules of engagement.

Officials stated that a warning which should officially be issued at 10 miles under the new rules of engagement was actually issued earlier, at 15 miles, out of good intentions, in the light of the possibility that the plane detected on the radar was Russian, and that it was then repeated every 2 miles.

These unfortunate events are of course of the kind that neither side would ever wish to see happen. The commonsensical and calm attitude Turkey displayed during Russia’s violation of the engagement rules that took place a few months ago, makes it obvious right from the beginning that Turkey’s attitude bears no ill intentions. However, when a country’s border security is violated, that country’s right to defend its air space and territory within the rules of international law has to be respected. Nevertheless, it is by no means possible for us to consent to a procedure like engagement that is very likely to result in death and that jeopardizes the pilots and the people on the ground, as well.

Crises are normal, but the sensible course is to calm them down rather than escalating them

The greatest responsibility in such tense and sensitive situations falls to rational, responsible and conciliatory leaders and officials. Similar regrettable incidents can occur at any time, between any two countries. The important thing is to resolve such problems amicably, through mutual communication, without allowing tensions to escalate. It is very important to be on guard against opportunists inciting war and conflict by making use of such incidents to excite the warmongers.

When asked whether he thought the incident could escalate into a conflict, Minister Lavrov said, “We do not intend to fight with Turkey; our relationship with the Turkish people has not changed. There are just questions that have arisen for the Turkish government.”

During the telephone conversation between Erdoğan and Obama in the wake of the incident, the two leaders stated that they agreed on the importance of de-escalating tensions and taking measures to prevent any repetition of similar incidents. However, some officers have made some non-constructive statements regarding the incident at a later time. Despite this, positive developments also happened and most recently Tanju Bilgic, the spokesperson for the Turkish Foreign Ministry said that Minister Mevlut Cavusoglu spoke on the phone with his Russian colleague Sergei Lavrov and announced that the two Ministers decided to meet in the next days.

Although the developments on the plane crisis can change constantly, there is one thing that should be kept in mind:

Speaking harsh words out of feelings of anger and revenge because of military and political tensions that can easily be solved through mutual good intentions, reconciliation and understanding, and behaving in an emotional manner will be of no use to anyone. On the contrary, that will just lead to irretrievable political, social and economic losses that will be hard to overcome. It would be totally immoral and inhuman to make enemies out of these two giant communities with their populations of many millions.

No matter what tensions there may be between their states or governments, the Russian and Turkish peoples have enjoyed deep-rooted relations for hundreds of years, and are two inter-related fraternal communities. Such incidents can never do away with a deep-rooted and stable friendship. However, it is very important for members of both communities to be on their guard against the provocations of members of secret states who thrive on enmity, conflict, war and bloodshed, trying to sow the seeds of hatred on this brotherhood and friendship.

At a time when Russia was being isolated by a part of the Western community, Turkey has taken sides with Russia, playing down any political concerns and following a policy of friendship, brotherhood and neighborliness. Despite the insistence of her allies siding against Russia in every aspect, Turkey has never assumed an attitude against Russia. On the contrary, Turkey preserved her determination for sustaining joint political, social, economical and commercial relations with Russia, which have all improved to a great extent particularly in the recent period.

For all the above reasons, we have hope for the best that both leaders of these two countries, Mr. Putin and Mr. Erdogan, who are notable with their intelligence, experience, humanistic and peaceful attitudes, will take these facts into account in the coming days; and with light of good sense and wisdom, be the forerunners for swiftly reducing the tension between the two countries, normalizing relations and making them even better than before.

We would like to make a special emphasis that especially during this period we are in, keeping the deep-rooted and pleasant relations between Turkey and Russia, as well as the bonds of love, friendship and brotherhood, even stronger and healthier than ever, should be put ahead of any interest, stake or expectation that would damage this bond.