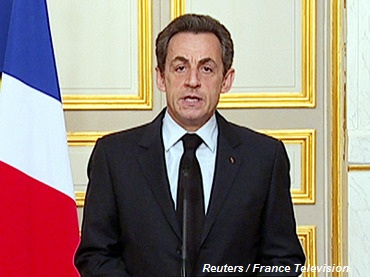 Prisonplanet- French President Nicolas Sarkozy has spoken out strongly against extremism, but urged his countrymen not to stigmatize Muslims, after a 32-hour siege that resulted in the death of a radical Islamist gunman who confessed to killing seven people.

Sarkozy has proposed a raft of new anti-terrorist measures.

Speaking in a press conference straight after the end of the siege in Toulouse, the French president said anyone regularly visiting websites “justifying terrorism” or “preaching hatred and violence” would be prosecuted.

Sarkozy also called for punishments to those who travel to radical Islamic camps, even if they commit no crimes on French soil.