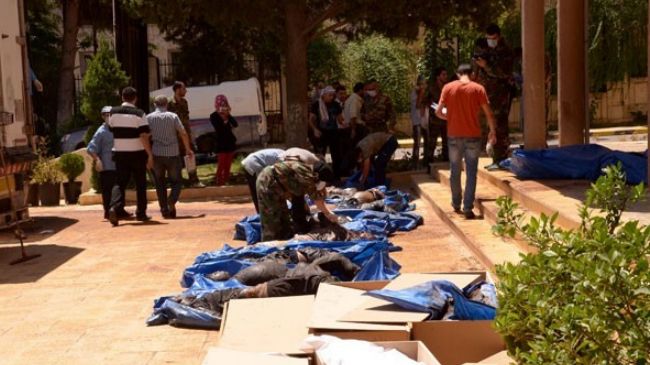 A political analyst says the thousands of lives lost across the Muslim world during the holy month of Ramadan through Saudi-funded terrorist attacks belie Saudi Arabia’s ostensibly charitable bid to make donations to an anti-terror center, Press TV reports.

“While Muslims were fasting and praying for Ramadan, the House of Saud and its associates were all the time gorging on the deaths of thousands,” Finian Cunningham wrote in an article published by Press TV.

Earlier in August, Saudi Arabia’s King Abdullah donated USD 100 million to set up a UN centre for fighting terrorism, calling on the international community to support the centre “to get rid of the forces of hatred, extremism and criminality.”

Cunningham described the move as a “public relations exercise” and “a feat in doublethink and duplicity” aimed at whitewashing Saudi Arabia’s support for the heinous crimes of terrorists and extremists against Muslims in various countries.

“While King Abdullah was spilling Saudi coffers to ostensibly help fight terrorism, Ramadan was ending with thousands of Muslims having their blood spilled by terrorists funded by Saudi Arabia – terrorists of the state and non-state variety alike.”

“In Iraq, more than 1,000 people lost their lives in car bombs and gun attacks that targeted mainly Shia districts of the capital, Baghdad. It was the highest monthly death toll since 2007, according to UN figures. It is well-known that the House of Saud has been financing extremist Wahhabi groups affiliated with Al-Qaeda in Iraq over many years – even when these terrorists were killing thousands of soldiers belonging to its American sponsor,” Cunningham said.

Referring to an increase in terrorist attacks and bloodshed in Syria during Ramadan such as the massacre of more than 120 innocent people in the village of Khan al-Assal on 27 July, Cunningham said Saudi Arabia bought USD 50 million worth of weapons from Israel to send to its mercenaries in Syria.

These schemes, the political analyst added, are hatched by Saudi Arabia in collaboration with the US and Israel, with the aim of fueling “sectarian strife through mass killings… in order to undermine the central governments of those states [Syria, Iraq, Egypt, Lebanon, etc].”

Israel and the global banking and energy cartels are behind the deteriorating crises across the Middle East as they are the key beneficiaries of the destruction of regional states, a political analyst tells Press TV.

“The chief beneficiaries are going to prove to be Israel, the international bankers who always make monies off of war, and finally the international multi-national energy consortiums who will profit by the destruction of these indigenous countries,” said Mark Dankof in a Sunday interview.

Dankof pointed to the role of Takfiris in the Thursday attack in Lebanon and the ongoing crisis in Syria as “a confluence and a congruence of interests” of Israel and some Persian Gulf monarchies.

“The fact of the matter is that these Takfiris are clearly being utilized by Israel and by Zionist interests. It’s the same coalition behind this in Lebanon that is up to no good in Syria,” the analyst said.