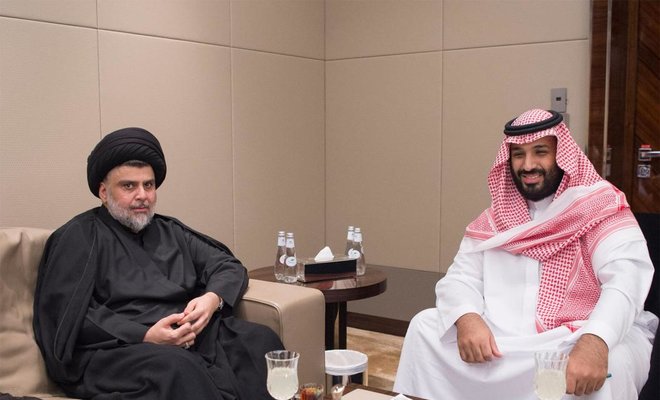 JEDDAH: Saudi Crown Prince Mohammed bin Salman met on Sunday with Iraq’s influential Shiite leader Moqtada Al-Sadr, who is on a rare visit to the Kingdom.

Crown Prince Mohammed received Al-Sadr at his office in Jeddah and the two “reviewed Saudi-Iraqi relations and a number of issues of mutual interest,” said the Saudi Press Agency (SPA).

Al-Sadr was met at the King Abdulaziz International Airport in Jeddah by Thamer Al-Sabhan, the kingdom’s former ambassador to Iraq and its first to be assigned to Baghdad after a 25-year break.
Al-Sabhan was renamed minister of state for the Gulf region after tensions with the Iraqi government.

He’d claimed that Iranian-backed militias were plotting to assassinate him.

A statement released Sunday by Al-Sadr’s office said he had been invited to the Kingdom.
Al-Sadr is among those who have called for the disbandment of militias organized in Iraq to help the government fight Daesh extremists.

Saudi Arabia and its allies have expressed concern about the influence of Iran over Shiite militias, warning that they could be used against Sunnis in Iraq.
— With a report by AP