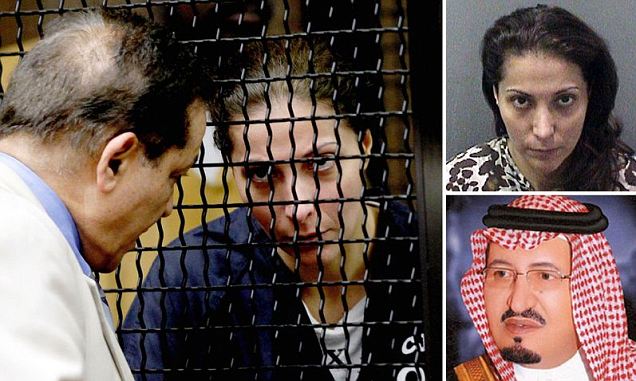 The Saudi Royal princess accused of keeping a Kenyan woman as a domestic slave posted bail of $5 million on Thursday night and is expected to be freed later in the evening. Meshael Alayban, 42, who is married to Prince Abdulrahman bin Nasser bin Abdulaziz al Saud the grandson of King Abdullah (bottom right), appeared in an Orange County court in the morning dressed in a blue jumpsuit and answered the judge from behind grilled bars. MailOnline

Los Angeles (CNN) — A woman identified as a Saudi Arabian princess has been accused of holding a domestic servant against her will at her condominium in Irvine, California.

Alayban appeared in an Orange County court in Santa Ana on Thursday, and the judge continued the arraignment until July 29. In the courtroom, Alayban was kept inside a cage-like holding space and spoke with her attorney through the wire webbing.

Alayban is being held in the Orange County jail in lieu of $5 million bail. She faces a maximum sentence of 12 years if convicted.

Police say the servant is a 30-year-old woman, originally from Kenya, who managed to escape Tuesday and flag down a bus. A passenger helped her contact the Irvine Police Department.

Investigators say the alleged victim had contracted to work with Alayban’s family in Saudi Arabia in March 2012. Her salary was set at $1,600 a month for working eight hours a day, five days a week. But once she arrived in Saudi Arabia, the servant says, her passport was taken from her. She also says she was paid only $220 a month and forced to work 16 hours a day, seven days a week.