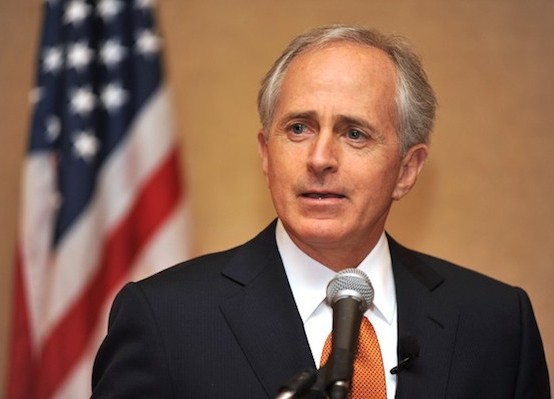 The Saudi-led campaign against Qatar has had the unintended but welcome effect of forcing some American politicians to start criticizing the Saudis publicly:

An influential US Republican senator has criticised the Saudi Crown Prince, Mohammed bin Salman, over a blockade on Qatar by the kingdom and three other Arab states.

The comments by Bob Corker, chairman of the US Senate Foreign Relations Committee, came as tensions in the region continue over the crisis, with US Secretary of State Rex Tillerson expected to make an unscheduled stop in Doha on Thursday.

“The amount of support for terrorism by Saudi Arabia dwarfs what Qatar is doing,” [bold mine-DL] Corker said on Wednesday.

The Saudi-led “Anti-Terror Quartet” has been an exercise in the pot calling the kettle black from the start, but the danger for the Saudis and their allies is that using the rhetoric of anti-terrorism to beat up on Qatar will only draw attention to their own shoddy record. Corker is right to call out the Saudis on this issue, but if what he says is true he should also demand an end to U.S. support for the Saudi-led war on Yemen and a serious reevaluation of the entire relationship with Riyadh. Instead of choosing sides in a feud among client states, the U.S. should be rethinking its ties with all of them.

If so many of our regional clients are involved to one degree or another in supporting jihadists and promoting their ideology, we should be looking for ways to reduce or eliminate U.S. support for them and their unnecessary wars. A good place to start is to cut off all weapons, refueling, and intelligence support for the Saudi-led coalition in Yemen. The coalition’s disastrous war there has greatly strengthened Al Qaeda in the Arabian Peninsula (AQAP), and the U.S. should stop fueling a conflict that has been a boon to jihadists.