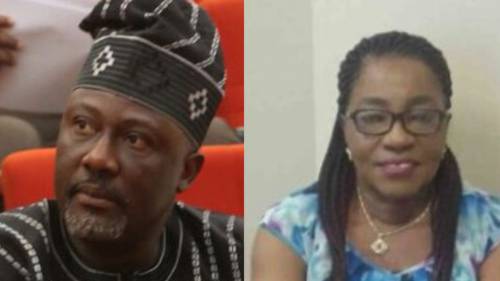 An audio tape obtained by Saharareporters has revealed how Nigerian Senator Dino Melaye compromised Justice Akon Ikpeme, the tribunal judge who handled his election case in 2015.

In the tape, which captures a telephone conversation between Justice (Mrs) Akoh and Mr. Melaye, the judge is overheard asking Mr. Melaye to give her a bribe in US dollars. She also asks Mr. Melaye to assist a person Dino repeatedly referred to as her “daughter” secure a job at the Cross Rivers State Ministry of Health.

Our investigation reveals that Justice Ikpeme is married to a Cross River medical doctor. She is reportedly number 3 in the hierarchy of the Cross Rivers judiciary.

Saharareporters could not confirm if Mrs. Ikpeme’s daughter got a job with the Cross Rivers state government, but in a second call between her and Mr. Melaye, the Senator bragged that he had already spoken to the state governor, Prof. Ben Ayade.

In 2016, Justice Ikpeme dismissed a petition by Smart Adeyemi, Mr. Melaye’s opponent, in accordance to the plot to let Mr. Melaye off the hook at the election tribunal.

SaharaReporters contacted the spokesperson to the  Cross Rivers state governor, Christian Ita who said they could only locate a family member of the Ikpeme’s who was already a civil servant in the state before Prof. Ayade became the state governor in 2015.

Judge: I can’t hear you

Dino: I said you have refused to come o

Judge: I will come

Dino: I hope rapture will not take place before you come

Judge: I will come when there’s opportunity

Judge: And then after March she will start getting pay

after he said when the sch….. after the first quarter

so if you discuss with her then err whatever she preferred

he said i should just give her a note to come

Judge:  Let me discuss with her at least you can er send a note to her email it to her if she’s available

Judge: but let me discuss with her

Judge: thank you very much

Dino:  Hello… M’Lord …. get out of the chambers

Judge: Okay… I wanted to let you know that I am back (in my state)

Dino: So, I will look for a day during the week so I will just keep talking to you, once I return I will come

Judge: I wanted to tell you that whatever you want to do, make it in eeee USA

Judge: I wanted to ask because…

Dino: I have given it to the perm sec so they will definitely reach her. I will call him again as soon as I come back so they can invite her