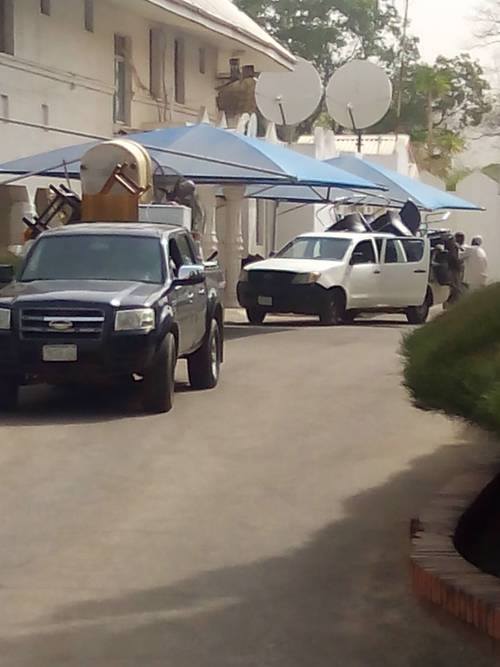 At 9:00 am Wednesday morning cleaners, accompanied by some police, stormed the office of the Deputy Governor of Niger State, Ahmed Musa Ibeto. Mr. Ibeto defected last year from the Peoples Democratic Party (PDP) to the All Progressives Congress (APC) in Niger State.

“I spotted two Toyota Hilux vehicles, white and black, with registration number PILOT 02 carrying files and chairs belonging to the Deputy Governor out of Government House Minna to an unknown location,” a witness told SaharaReporters.

Deputy Governor Ibeto and the Governor, Muazu Babangida Aliyu, became sour with one another after Mr. Ibeto’s defection to the APC and as a result of mistreatment during the crude gubernatorial primary races in Niger State.

Governor Aliyu was accused of rigging the primary contest in Niger State for PDP candidate Mr. Umar Nasko, at Udrus Legbo Kutigi Hall, where Commissioner for Local Government, the Hon. Kantigi, wrote NASKO on every paper for delegates to slot in a box.

The incident at Mr. Ibeto’s office came barely two weeks after Governor Aliyu handed over the affairs of the state to the Speaker of Niger State House of Assembly, instead of his Deputy Governor Mr. Ibeto. Already, Mr. Ibeto was barred from attending the State Executive Council meetings as a punishment for defection to APC. There are also moves to impeach the Deputy Governor from office.

It is not certain whether the ejection of Niger State Deputy Governor from government house signifies and end of his era in the current leadership role, or if it is simply impunity and recklessness on the side of Governor Babangida Aliyu.