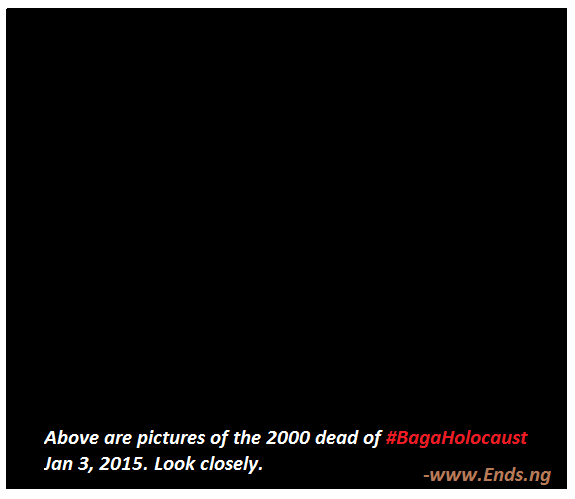 Human right activist, Dr. Peregrino Brimah of ENDS, Every Nigerian Do Something, appears to be making a point to the world by presenting the above black, blank image to portray the 2000 dead in the Baga attack of January 3rd, 2015. 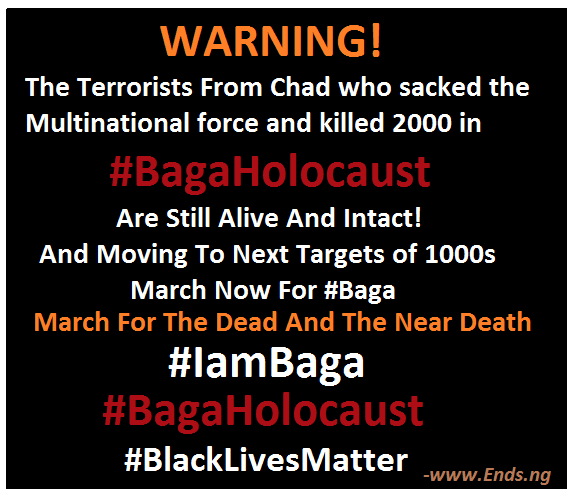 This as a million march, the so-called “Unity rally” is being held with world leaders in attendance in France after about 17 were killed by terrorists in Paris.

The world has largely ignored the more horrendous attack which is one more in a continuous cycle of extermination in the nation’s Muslim-predominant northeast.

Dr Brimah says, the black blank image illustrates the unknown dead; the unmarked graves, the uncommemorated lives. It demonstrates the reality that their deaths will not be avenged as the Nigerian government will not be sanctioned and held to account for grossly failing to protect the lives of its citizens, Muslims and Christians who have been continually exterminated in a foreign orchestrated, world-power assisted, Chad-based mass displacement exercise that has lasted the entire 6-year duration of the Jonathan presidency.

Large numbers of the terrorists who came into Nigeria on January 6th to dispel the multinational force stationed and exterminate the people in more than 16 villages in the Baga locality were from neighboring Chad.

Nigerians as a whole are victims. Nigeria’s president conspired with the president of Chad, Idriss Deby to announce a fake scam ceasefire in October of 2014 which was plotted to enable Boko Haram regroup and become a more deadly force to commit unthinkable atrocities including this 2000 massacre. But in spite of these government acts of terrorism being committed in the full view of the world, no serious action, sanctions or other repudiation was accorded to the Nigerian and Chadian leaders, which makes the global powers culpable or at the very least, complaisant in the continued acts of terror against the innocent people of Nigeria.