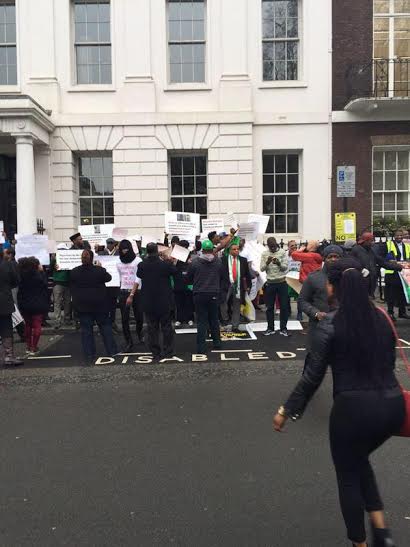 Video shows the rented PDP crowds at the Chatham house speech of opposition candidate, General Buhari in the UK, Thursday. There were just around 20 paid thugs that made up the crowd after an investment of $20,000 by the ruling party.

The interviewer, Rose P. Graham was very disappointed in the unkempt nature of president Jonathan’s rented crowds. She said they had body odor and when interviewed they were all clearly clueless about why they were even there and an obvious rented crowd. She was ashamed that Nigeria’s Jonathan government would be doing such to disgrace the country’s reputation for stupid political purposes. We reported yesterday that president Jonathan paid $20,000 to rent the crowd of thugs seen in the video.

It appears a crowd for change came out after hearing of the PDP rented crowd in the news yesterday and this crowd of Buhari/Osinbajo supporters was even much larger than the PDP paid thugs. This crowd of frustrated Nigerians chanted, PDP, ole (thief), Jonathan – thief, Fayose – thief.

I personally have remained silent until the General spoke this morning at Chatham House on Prospects for Democratic Consolidation in Africa: Nigeria’s Transition, but I knew more about the other party – PDP- from the followers and I’ve engaged in discourse with some on social media platforms. Many of them laughed the leadership, made several jokes out of Goodluck Jonathan’s cluelessness, and the likes of Patience, Femi Fani Kayode and so on.

Now, top so called ‘Pastors’, ‘Prophets’ and ‘Imams’ enjoy taking advantage of his weaknesses and this has not helped the People’s Democratic Party (PDP) to position itself as a political party fit for the future, or at least to carry on from March 28, 2015 (if not postponed) till 2019. Maybe our religious leaders need to learn to say nothing when they have nothing to say, than try to say anything to peoples that are suffering and smiling, and now getting deluded with sweet talks from pulpits.

Please, let’s put our church, mosque and other sentimental affiliations aside. Let’s save Nigeria for us Nigerians, not for cluelessness, hooligans and religious hypocrites who are ready to hijack all that we have invoking the name of God, and even speaking in tongues and prophesying for our division. We can continue to live in peace and unity, beyond their prophecies and expectations.

Enough said here. I share my thoughts about Nigeria’s politics at http://www.tobiakiode.com/group/save-… if you’ll like to read more about how and what I care about as a concerned Nigerian.

Anyways, Rose P. Graham went on the streets of London to speak with a crowd Dotun Taylor called “Rent a Crowd” meant to demonstrate against Buhari at the Chatham House today 26/2/2015…

The people were clearly confused and some did not even know why they were there… This is how to displace illiteracy, this is the strength of the new PDP.

Please watch and continue to share until the right candidate for Nigeria is voted and declared President. May God bless Nigeria continuously and help us to be in and do His will.

Rose is Executive Director at LionRose Productions and she can be contacted and appreciated here at https://www.facebook.com/rose.peter.982