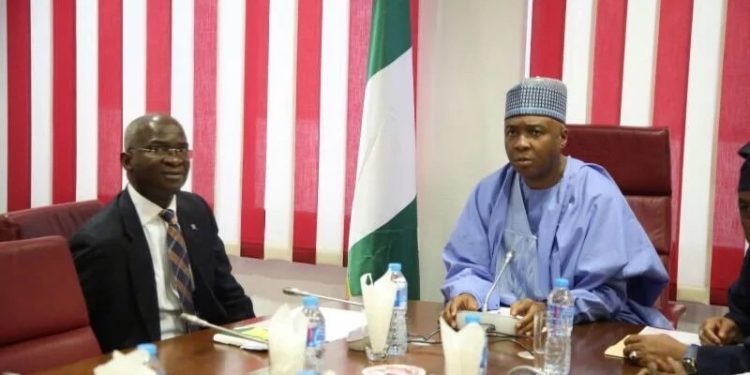 Socio-Economic Rights and Accountability Project (SERAP) has sued the Federal Government over its “failure to stop former governors and now serving senators and ministers from receiving double pay and life pensions, and failure to seek recovery of over N40bn of public funds unduly received by these public officers.

The suit number FHC/L/CS/1497/17 filed last Friday at the Federal High Court Ikoyi followed the organization’s request to the Attorney-General of the Federation and Minister of Justice Mr. Abubakar Malami, SAN urging him to use his “position as a defender of public interest to institute legal actions to stop former governors from enjoying emoluments while drawing normal salaries and allowances in their positions as senators and ministers.”

The suit brought pursuant to Order 34, Rules 1 and 3 of the Federal High Court Rules 2009 and the inherent jurisdiction of the court argues that, “Public function should be exercised in the public interest. Double emoluments promote private self-interest or self-dealing. By signing double emoluments laws, which they knew or ought to know that they would be beneficiaries, these former governors have abused their entrusted positions, and thereby obtained an undue advantage, contrary to article 19 of the UN Convention against Corruption to which Nigeria is a state party.

The suit is seeking the following reliefs:

AN ORDER granting leave to the Applicant to apply for Judicial Relief and to seek an order of Mandamus directing and or compelling the Respondent to urgently institute appropriate legal actions to challenge the legality of states’ laws permitting former governors, who are now senators and ministers to enjoy governors’ emoluments while drawing normal salaries and allowances in their new political offices; and to identify those involved and seek full recovery of public funds from the former governors.

AND for such order or other orders as this Honourable Court may deem fit to make in the circumstance.

The organization is also arguing that “Senators and ministers should not be receiving salaries and pensions running into billions of naira from states that are currently unwilling or unable to pay their workers’ salaries and pensioners’ entitlements. National and international laws implicitly forbid public officials entrusted with public resources from granting to themselves emoluments for life while serving in other public offices including as senators and ministers.”

The suit read in part: “Taking advantage of entrusted public offices and positions to enact laws to grant double emoluments and large severance benefits to serving public officials amounts to not only an abuse of office but also incorrect, dishonourable and improper performance of public functions, as per the provisions of paragraph 2 of article 8 of the United Nations Convention Against Corruption.”

“By virtue of Sections 150 and 174 of the 1999 Constitution of the Federal Republic of Nigeria (as amended) and Section 26 (2) of the Corrupt Practices and Other Related Offences Act 2000, the Respondent as the Chief Law Officer of the country and the defender of public interest is constitutionally and statutorily empowered to institute and undertake criminal proceedings against any person in Nigeria in respect of any offence created by or under any Act of the National assembly in superior courts in Nigeria.”

“The Federal Government has a responsibility to stop former governors from receiving double pay at the expense of workers and pensioners. This position is buttressed by article 27 of the Vienna Convention on the Laws of Treaties, which provides that no state can justify the noncompliance with an international treaty with reference to internal law, including even the constitution.”

No date has been fixed for the hearing of the suit.

It would be recalled that following SERAP’s letter to Malami Senate President Dr Bukola Saraki told the News Agency of Nigeria (NAN) Forum in Abuja yesterday, that he wrote a letter to the state government to stop the payment of the pension “the moment I saw that SERAP allegation.” He said, “No, I’m not collecting pension; the moment I saw that allegation, I wrote to my state to stop my pension.”

So far, Dr. Kayode Fayemi Minister of Mines and Steel Development and his counterparts in the Ministry of Labour and Employment, Senator Chris Ngige, and Minister of Power, Works and Housing Babatunde Fashola have denied ever receiving double payments and retirement benefits as former governors in addition to other roles in public office.

SERAP’s letter to Malami read in part: “Under the Lagos Pension Law a former governor will enjoy the following benefits for life: Two houses, one in Lagos and another in Abuja estimated to cost between N500m and N700m. Others are six brand new cars replaceable every three years; furniture allowance of 300 percent of annual salary to be paid every two years, and a close to N2.5m as pension (about N30m pension annually); free medicals including for his immediate families; 10 percent house maintenance; 30 percent car maintenance; 10 percent entertainment; 20 percent utility; and several domestic staff.”

“In Akwa Ibom, state law provides for N200m annual pay to ex governors, deputies; pension for life at a rate equivalent to the salary of the incumbent governor/deputy governor respectively; a new official car and utility-vehicle every four years; one personal aide and provision of adequate security; a cook, chauffeurs and security guards for the governor at a sum not exceeding N5m per month and N2.5m for the deputy governor. Others are: free medical services for governor and spouse at an amount not exceeding N100m for the governor per annum and N50m for the deputy governor; a five-bedroom mansion in Abuja and Akwa Ibom and allowance of 300 percent of annual basic salary for the deputy governor; 300 percent of annual basic salary every four years and severance gratuity.”

“Similarly, the Kano State Pension Rights of Governor and Deputy Governor Law 2007 provides for 100 percent of annual basic salaries for former governor and deputy; furnished and equipped office; a 6-bedroom house; well-furnished 4-bedroom for deputy, plus an office; free medical treatment along with immediate families within and outside Nigeria where necessary; two drivers; and a provision for a 30- day vacation within and outside Nigeria.”

“In Gombe State, there is N300 million executive pension benefits for the ex-governors. In Kwara State, the 2010 law gives a former governor two cars and a security car replaceable every three years; a well-furnished 5-bedroom duplex; 300 per cent of his salary as furniture allowance; five personal staff; three State Security Services; free medical care for the governor and the deputy; 30 percent of salary for car maintenance; 20 per cent for utility; 10 percent for entertainment; 10 per cent for house maintenance.”

“In Zamfara State, former governors receive pension for life; two personal staff; two vehicles replaceable every four years; two drivers, free medical for the former governors and deputies and their immediate families in Nigeria or abroad; a 4-bedroom house in Zamfara and an office; free telephone and 30 days paid vacation outside Nigeria. In Sokoto State, former governors and deputy governors are to receive N200m and N180m respectively being monetization for other entitlements which include domestic aides, residence and vehicles that could be renewed after every four years.”

“The abolition of such laws therefore is a necessary first step towards delivering on the constitutional promise of equal protection and equal benefit of the law for a distressingly large number of Nigerians. Otherwise, public officials will remain seriously out of touch with a major source of poverty and discrimination in the country.”