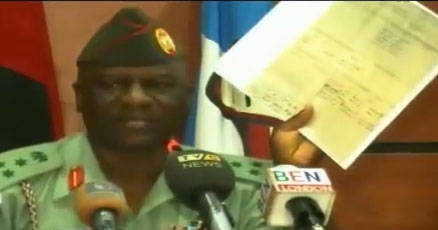 The Nigerian Army has finally found the missing certificate which has raised contention as to the eligibility of Gen Mohammadu Buhari to contest the presidential election.

The All Progressives Congress (APC) has released statement on its Facebook alleging that someone from the Peoples Democratic Party must have hid Buhari’s certificate in order to bar him from contesting the presidential poll.

The release by APC reads:

Someone working for the PDP obviously removed the certificate from his file at the Defence Headquarters.

This is part of the strategies the PDP deployed in their campaign of calumny.

All Change Agents who worked tirelessly to repel the Jonahideens should pop something wherever you are. We know it was foolhardy to say that Buhari had no certificate. But try as we did to convince them that this was a non issue, they refused to shift ground. It was even most disgraceful that the Director General of the PDP Presidential Campaign organisation was a Retired Colonel, in the person of Ahmadu Ali. He should have cautioned them about bringing the Military to disrepute. He did not.

This singular act as far as I am concerned did more damage than good to the PDP.

Beyond bringing out Buhari’s certificate, there is an urgent need to restore pride and sanity to the military. As it stands now, the Nigerian Army, is an Army of anything goes! There have to be a clean sweep and overhaul of the military from top to bottom! The entire top echelon at the Defence Headquarters should turn in their resignation and leave with President Goodluck Jonathan on the 29th of May, so that the process of rebuilding and restoration shall begin in earnest.

To God be all the Glory!

The APC UK has also confirmed the news on its twitter handle, buttressing the party’s claim that Buhari’s certificate had been found by the Nigerian Army.

Back in January, there was a clamor over the inability of Buhari to be produce his Secondary School leaving Certificate. The certificate issue became a saga after the Nigerian army which claimed it had the certificate later retracted its statement saying the certificate was not in its possession.