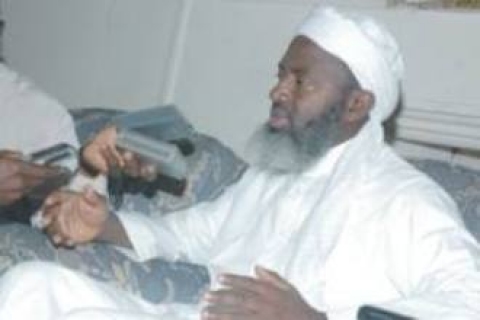 SaharaReporters has gathered that there are serious security concerns over the safety of Sheik Ahmad Gumi following his critical statement against sectarian bombing that targets innocent people. In a Ramadan sermon delivered yesterday, the Islamic cleric declared that it is not Islamic to inflict death on others, adding that those killing innocent people are ignorant of Islam’s core teachings.

A source who prays at Sultan Bello Mosque, Kaduna, where Sheik Gumi teaches daily told SaharaReporters that security has been stepped up at the mosque. “There are security concerns and fears,” said the source, adding that “Sheik Gumi has spoken with a bluntness and bravery that no other cleric has shown so far.” A senior Nigerian police officer in Kaduna confirmed that security around the sheik and Sultan Bello Mosque had been tightened.

A Kano-based Islamic scholar told SaharaReporters that he would not be surprised if some extreme elements tried to attack Mr. Gumi. He stated that the sheik was right “in making it clear that all those carrying out suicide bombings and killing people are not real Muslims, but misguided heretics who have completely deviated from Islam.” The scholar praised the sheik for “preaching that there is no justification for those using bombs to kill fellow Muslims and non-Muslims with whom there should be neighborly trust.”

Mr. Gumi’s sermon against the incessant violence in Nigeria is widely seen as a direct reproach to Boko Haram militants who frequently claim credit for deadly explosive attacks. The source who attends Sheik Gumi’s mosque said Muslims all over Nigeria should be proud that the cleric has affirmed that any suicide bomber who kills innocent people “will not see God.”

“Sheik Gumi kept repeating that there is no way those doing [these killings] will make heaven, without repenting to Allah.”

Mr. Gumi also challenged other Muslim clerics and teachers to boldly preach against killings and other acts of violence that threaten to tarnish the image of Islam.

The Kano-based scholar urged Muslims in the country to pay heed to other messages from the courageous cleric in Kaduna. “If other clerics become like Sheik Gumi, we will soon overcome the situation we are facing.”

In his sermons, Sheik Gumi has charged all Muslims to stand up, and save their religion from present challenges. The cleric also condemned today’s suicide bombing attack that targeted the Emir of Fika.

Sheik Gumi has called on those mounting the attacks to renounce violence, and suggested that they be granted the same kind of amnesty extended to Niger Delta militants.
The cleric, who has a reputation for fearlessness, is the son of the late famous Sheik Abubakar Mahmud Gumi. He is based in Saudi Arabia where he lives with his family.